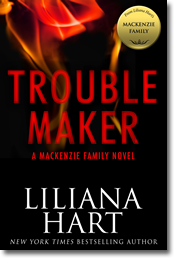 Marnie Whitlock has never known what it’s like to be normal. She and her family moved from place to place, hiding from reporters and psychologists, all because of her gift. A curse was more like it. Seeing a victim, feeling his pain as the last of his life ebbed away, and being helpless to save him. It was torture. And then one day it disappeared and she was free. Until those who hunted her for her gift tried to kill her. And then the gift came back with a vengeance.

Beckett Hamilton leads a simple life. His ranch is profitable and a legacy he’ll be proud to pass onto his children one day, work fills his time from sunup to sundown, and his romances are short and sweet. He wouldn’t have it any other way. And then he runs into quiet and reserved Marnie Whitlock just after she moves to town. She intrigues him like no woman ever has. And she’s hiding something. His hope is that she begins to trust him before it’s too late.