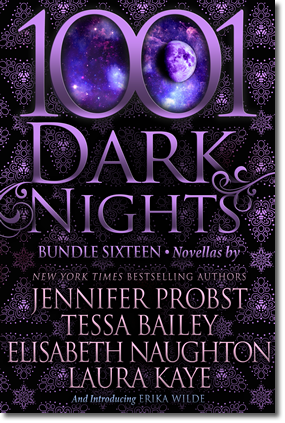 SOMEHOW, SOME WAY: A Billionaire Builders Novella by Jennifer Probst
When an opportunity to transform a dilapidated house in a dangerous neighborhood pops up, Charlotte Grayson goes in full throttle. Unfortunately, she’s forced to work with the firm’s sexy architect Bolivar Randy Heart (aka Brady), who’s driving her crazy with his archaic views on women. Somehow, some way, they need to work together to renovate a house without killing each other…or surrendering to the white-hot chemistry knocking at the front door.

TOO CLOSE TO CALL: A Romancing the Clarksons Novella by Tessa Bailey
A fairytale college career skyrocketed Kyler Tate to the NFL draft. Adoration and opportunity are thrown in his direction wherever he goes, thanks to being chosen in the first round by the Los Angeles Rage. None of the accolades mean anything, though, without his high school sweetheart, Bree Justice, by his side. Four years ago, she walked away from Kyler, choosing a quiet life over the flash and notoriety his career would someday bring. Now he’s back in their Indiana hometown, refusing to leave for Los Angeles without her.

HUNTED: An Eternal Guardians Novella by Elisabeth Naughton
Erebus was Hades’ secret weapon in the war between the immortal realms until Hades lost him in a bet to Zeus. For the last hundred years, Erebus has trained Zeus’s Siren warriors in warfare and the sexual arts. But he’s never stopped longing for freedom. Lately, he also longs for one Siren who entranced him during their steamy seduction sessions. A nymph he quickly became obsessed with and who was ripped from his grasp when her seduction training was complete. One he’s just learned Zeus has marked for death.

EYES ON YOU: A Blasphemy Novella by Laura Kaye
When a sexy stranger asks Wolf Henrikson to rescue her from a bad date, he never expected to want the woman for himself. But their playful conversation turns into a scorching one-night stand that reveals the shy beauty gets off on the idea of being seen, even if she’s a little scared of it, too. As Wolf introduces her to his world at Blasphemy, Liv finds herself tempted to explore submission and exhibitionism with the hard-bodied Dom.

THE MARRIAGE DIARIES by Erika Wilde
Even after nearly twenty years of marriage, Jillian Noble is still madly in love with her sexy-as-sin husband, Dean. But now that their two sons are grown and it’s just the two of them alone again, there’s something that Jillian wants from her husband—the dominant man he rarely lets show. When Dean agrees to unleash his more assertive side, all bets are off as he introduces her to dark, forbidden desires that will change the course of their marriage.