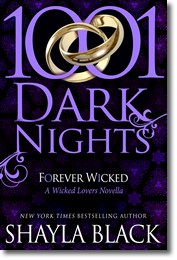 They had nothing in common but a desperate passion…

Billionaire Jason Denning lived life fast and hard in a world where anything could be bought and sold, even affection. But all that changed when he met “Greta,” a beautiful stranger ready to explore her hidden desires. From a blue collar family, Gia Angelotti wore a badge, fought for right—and opened herself utterly to love him. Blindsided and falling hard, Jason does the first impulsive thing of his life and hustles her to the altar.

Until a second chance proved that forever could be theirs.

Then tragedy ripped Jason’s new bride from his arms and out of his life. When he finds Gia again, he gives her a choice: spend the three weeks before their first anniversary with him or forfeit the money she receives from their marriage. Reluctantly, she agrees to once again put herself at his mercy and return to his bed. But having her right where he wants her is dangerous for Jason’s peace of mind. No matter how hard he tries, he finds himself falling for her again. Will he learn to trust that their love is real before Gia leaves again for good?

I adore your covers. Each series has a different feel, but are equally cohesive and series relative. What ones are your absolute favorites?

I don’t have a favorite of anything very often, and this is particularly true of covers. I have a lot of influence over the covers in each of my series. I love them all or I would send them back to be reworked until I did. I also feel strongly that the each cover should reflect the tone and content of the series. So Wicked Lovers covers tend to be modern, sensual, and romantic. Masters of Ménage makes the content of the books explicit, but with a tender presentation. Doms of Her Life conveys the intense longing and sexual connection of the characters. So everything expressed in all the covers is by design.

Social media is definitely a blessing and a curse these days…what is your favorite social media outlet and why?

I’m a Facebook girl. I post regularly on my page and love to hear from readers there. I do have a Twitter presence, but I haven’t exactly mastered saying everything I’d like in 140 characters, especially when I have excerpts to post. I haven’t dipped my toe into the other sites yet.

The reactions I’ve encountered run the gamut. Some people are really interested, some are scandalized, some are surprised because I seem so “normal.” LOL! At the end of the day, I don’t really put too much stock in the opinions of strangers. If someone has questions and wants to talk about it, great. If not, that’s fine, too.

What is one of the books you read when you were younger that helped shape the writer you are today?

Honestly, I didn’t read a book for pleasure until I was in college. I didn’t come from a family of readers and was deeply involved in dance and other activities when I was younger, so I rarely read. I checked outa few Nancy Drew titles, butrealized I just wasn’t a mystery girl. Once I discovered genres I do love, like romance, I was hooked.

What is the absolute worst job you’ve ever had?

Over the years, I’ve been fairly blessed to have jobs I mostly enjoyed. I left retail after college because it wasn’t for me. I didn’t make a very good secretary because I’m too independent and opinionated. Go figure… But the job I liked the least had nothing to do with the function of the position itself, but the people around me. I had a corporate job where I worked for someone unqualified and narrow-minded. The company eventually let this person go, but until they recognized this issue, it was a miserable time in my life. Thankfully, I now work for myself.

What made you choose this couple for Forever Wicked?

Since introducing Jason and “Greta” (Gia) in Belong To Me, I’ve been really interested in their story—a billionaire and a police officer who seem to have nothing in common. Because writers often ask questions, I found myself pondering…what does their relationship look like? What drew them to one another? What would their stumbling blocks to a happily ever after be? From there, I let them tell me the story from their perspective and wrote the book I heard with my heart.

How does it feel to kick off such an amazing project?

I’m humbled and blessed. I’m with such an amazing group of authors, and I’m still a little stunned to be launching this awesome endeavor. I greatly admire all these authors, many of whom I’ve read avidly for years. I go a little fan girl when I talk to several of them, but don’t tell.

Was it difficult keeping Jason and Gia to a novella? (Their story for sure could have gone on and on *fans self*)

It was! I could think of so many areas of their relationship to explore. I have no doubt their family dynamics will always be interesting. I also could have said more about their past, their future, or their respective careers. But I like to focus on the romance and their personal development, so that’s what I’ve done in Forever Wicked.

Jason and Gia have such opposite personalities. They’re both determined to pursue the path they think is best, but clearly have a soft spot for one another. What is the most challenging part of writing such different personalities?

On the one hand, writing any romance and convincing the reader that your characters are in love is a tough job. After all, put a hundred people in a room and ask them for the definition of love, you’ll hear a hundred different answers. So as an author, I do my best to just show the readers how the characters feel and express love, then hope that conveys. On the other hand, I think it’s absolutely true that opposites attract, largely because they balance one another out. I’ve been married to my polar opposite for nearly twenty-three years. I know that it can be a challenge, but infinitely rewarding.

Jason – Intense
Gia – Loyal
Their relationship – I can think of so many ways to say how I feel, all more than one word. Maybe we’ll leave this one to readers.

Thanks so much for having me here!