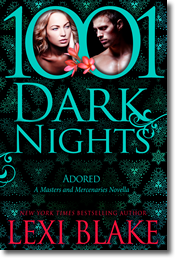 A man who gave up on love

A woman who always gets what she wants

Laurel Daley knows what she wants, and her sights are set on Mitch. He’s smart and sexy, and it doesn’t matter that he’s a few years older and has a couple of bitter ex-wives. Watching him in action at work and at play, she knows he just needs a little polish to make some woman the perfect lover. She intends to be that woman, but first she has to show him how good it could be.

A killer lurking in the shadows

When an unexpected turn of events throws the two together, Mitch and Laurel are confronted with the perfect opportunity to explore their mutual desire. Night after night of being close breaks down Mitch’s defenses. The more he sees of Laurel, the more he knows he wants her. Unfortunately, someone else has their eyes on Laurel and they have murder in mind.

I loved this story so much. The passion and emotion Laurel and Mitch share is beautiful and intense. How did you choose them for this novella?

When I’m writing a book at least one or two supporting characters end up demanding a story of their own. When I was writing Cherished, it was Laurel and Mitch who really stood out. They obviously longed for each other, but they have their issues that need to be resolved.

I truly admire your ability as a writer to show the reader how beautiful and filled with emotion the D/s relationship can be. What was the most emotional scene you’ve written?

I would say the most emotional D/s scene I’ve ever written was Jesse and Phoebe’s scene in You Only Love Twice. It’s her first time playing and she’s afraid to be tied down so Jesse offers to be her St. Andrew’s Cross. She holds on to him while being gently flogged and it’s really the first moment she realizes how much she can trust this man. It’s intimate. He can feel her and she can hold on to him. It’s a moment of pure intimacy that has nothing at all to do with sex.

I loved the suspense aspect of this story and the ending had me on the edge of my seat. Were you as nervous writing it as I was reading it?

I’m always nervous writing. I do tend to get a little worked up. It’s like method writing. My heart races along with my characters.

You also write an amazing paranormal series, Thieves. What is one paranormal book (or series) that has inspired you?

Laurell K. Hamilton’s Anita Blake series was truly a favorite of mine and Thieves was certainly influenced by it though it’s a much lighter series. I would say Thieves was influenced deeply by my love of Buffy and comic books as well. I love the idea of long term story telling – but in a way that doesn’t string the reader along. Thieves is written in “series” form. The first five books tell the story of Zoey, Daniel and Dev. The next several books, while set in the same world, will tell the story of different characters though Zoey and her crew are very important. For me it’s the best of both paranormal romance (with happily ever afters) and Urban Fantasy’s long term story arcs.

Who would you cast as Mitch and Laurel if you could make this story into a movie?

Gerard Butler is super hot and has that cantankerous edge Mitch has. I could definitely see him in the role. For Laurel I would need someone lovely, who sort of glows because that’s how Mitch sees her. I have a total girl crush on Blake Lively so I’m going with her.

Pictures of my three kids, a stuffed caterpillar a friend sent me from Germany (yes, that’s an interesting story), a million and one Post It notes (I’m addicted), a Bliss, CO beer stein I fill with pens, a label maker and more than one box of tissues. I go through a lot of tissues.

The RT convention is upon us! Do you have a funny (or awkward) convention or signing story you could share with us?

My first year at RT I was signing as Sophie Oak. This was in Chicago and my husband had come with me. So had my other husband—the gay best friend one. Kris Cook and I have been ridiculously close since we met years ago and he’s often hanging out with my husband. So they’re hanging out together and talking behind the table I’m signing books at. Ménage books. I meet the sweetest reader and talk for a while and then when she walks away I hear her tell her friend, “I got to meet Sophie and her husbands.”

What is your favorite thing to do when you aren’t writing?

When I’m not writing I’m reading. When I can, I travel. That would be my absolute favorite thing to do. I love to go and explore a new place.

Can you give us a hint on what you’re working on now?

I’m working on Masters and Mercenaries #9. It’s called Master No and it’s coming out in August!