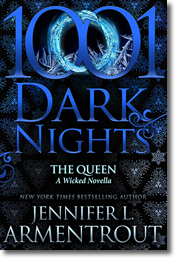 From New York Times and USA Today bestselling author Jennifer L. Armentrout comes the next installment in her Wicked series.

The King must have his Queen….

Bestowed the forbidden Summer’s Kiss by the King of the Summer fae, Brighton Jussier is no longer just human. What she is, what she will become, no one knows for sure, but that isn’t her biggest concern at the moment. Now Caden, the King, refuses to let her go, even at the cost of his Court. When the doorway to the Otherworld is breached, both Brighton and Caden must do the unthinkable—not just to survive themselves, but also to save mankind from the evil that threatens the world.

Oh, how I love Caden and Brighton’s story and how this last novella played out. Did you always know how they would end up or were surprised at the course the story took?

I always knew how the story would play out, but some of the details came to me while I was writing.

If you could give them a theme song, what would it be?

I’ve Had the Time of My Life from Dirty Dancing

If Tink came to visit you and the animals, which one of them do you think he’d love the most?

Probably the goats. They would be his new best friends.

If Baby Apollo could talk, do you think he’d have an accent?

I think he would just sound like a very small child whose consumed why too much sugar.

Just finished the sequel to From Blood and Ash and about to finish Grace and Glory.