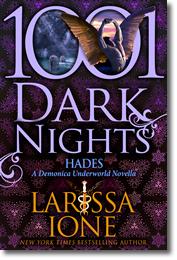 A fallen angel with a mean streak and a mohawk, Hades has spent thousands of years serving as Jailor of the Underworld. The souls he guards are as evil as they come, but few dare to cross him. All of that changes when a sexy fallen angel infiltrates his prison and unintentionally starts a riot. It’s easy enough to quell an uprising, but for the first time, Hades is torn between delivering justice — or bestowing mercy — on the beautiful female who could be his salvation…or his undoing.

Thanks to her unwitting participation in another angel’s plot to start Armageddon, Cataclysm was kicked out of Heaven and is now a fallen angel in service of Hades’s boss, Azagoth. All she wants is to redeem herself and get back where she belongs. But when she gets trapped in Hades’s prison domain with only the cocky but irresistible Hades to help her, Cat finds that where she belongs might be in the place she least expected…

Ok, so you may know I’m a huge fan of your books and I was so excited to read Hades! Was he always someone whose story you wanted to tell?

Yes! But before I expand on that, I wanted to thank you for having me! And to expand…Hades has been fascinating to me since he appeared in Eternal Rider and used demon body parts to play fetch with hellhounds. I just loved his morbid sense of humor. We kind of share that trait…

I loved Hades and Cat together and they heat they share is off the charts hot. How did you choose her for him?

When she showed up in AZAGOTH, I knew she was The One for him. Her innocence played really well against his darkness, and it gave him a reason to try to be better. It helped that although he’s a very dark person, he’s not truly evil.

You have an amazing ability to make even the baddest of bad boys worthy of a happy ever after. Have you ever written a character you just can’t ever see getting a shot at one?

I LOVE taking characters who have done terrible things (like Reseph and Harvester) and giving them a chance at redemption. When I hear a reader say how much they hate a character and that there’s no way they can ever fall in love with them, I take it as a challenge. That said, there are characters who will never get a happy ending. Like Raphael. He’s hopeless. And, obviously, Satan. And Gethel. They deserve every bad thing that comes their way!

If given the chance, whom would you cast as Hades and Cat for a movie version of Hades?

Honestly, I don’t know. I can never picture actors as my characters. I’d really have to trust casting people to handle that!

I loved your pop culture references in this book. You always have such a knack at making these thousands years old characters modern and with the times. Do these things just pop in your head as you write?

Yep! I’m a TV and movie junkie, so those kinds of references come naturally to me. And it makes sense that these ancient characters would keep up with the times or they’d get really, really bored and tired of living. They evolve like everything else, which means keeping up on all forms of entertainment, including human ones!

If you could have dinner with any of the characters you’ve written thus far, whom would you choose?

Ooh, that’s a tough one. I think I’d have to go either with someone with boundless knowledge, like Metatron or Reaver, or with a lot of medical knowledge, like Eidolon. Any of those characters would be fascinating to listen to. Scary, maybe, but fascinating.

I really admire your love of animals and all think it’s so great you share stories and pictures of your pup, Hexe, with us. Have any of your fans named pets after your characters?

Thank you so much! Animals are so important to me, so I do have a tendency to share, and they definitely appear prominently in my books. And yes, I’ve heard from several readers who have named their pets after my characters! I love that!!!! It’s the best compliment ever.

Quick! What would we find on your desk right this very second?

My LEGO Movie double-decker couch Lego set! Everything is AWESOME!!!! (You’re welcome for the ear worm.)

Right now, I’m finishing up a super-secret, super-fun project that you’ll see this fall. I’m also in the revisions stage for Base Instincts, an m/m Demonica novella that’ll come out later this year. And finally, I’m plotting out the next three books in my MoonBound Clan Vampires series as well as plotting out Tracker’s story for a novella I hope to release around Christmas!

Thank you again for having me! Great questions! 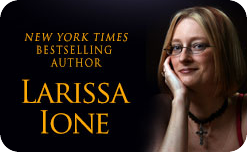