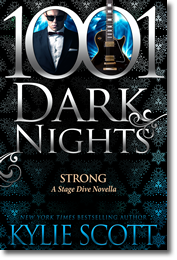 When the girl of your dreams is kind of a nightmare.

As head of security to Stage Dive, one of the biggest rock bands in the world, Sam Knowles has plenty of experience dealing with trouble. But spoilt brat Martha Nicholson just might be the worst thing he’s ever encountered. The beautiful troublemaker claims to have reformed, but Sam knows better than to think with what’s in his pants. Unfortunately, it’s not so easy to make his heart fall into line.

Martha’s had her sights on the seriously built bodyguard for years. Quiet and conservative, he’s not even remotely her type. So why the hell can’t she get him out of her mind? There’s more to her than the Louboutin wearing party-girl of previous years, however. Maybe it’s time to let him in on that fact and deal with this thing between them.

An Exclusive Interview With Kylie Scott:

Oh, I just adored Martha and Sam so much! How did you choose them for this novella?

I wanted to write that story since “Deep” was released. Sam’s always played such an interesting part in the Stage Dive world. And Martha is sort of the wicked witch of the story, so redeeming/explaining her was fun.

If you could dream cast anyone for Martha and Sam’s roles in a STRONG movie, who would it be?

I always liked Jason Statham for Sam. He’s a very nice looking man who’s also action capable. Especially loved him in “Spy”. Who knew he could do comedy? It was great. I’m not sure about Martha. Anne Hathaway would probably make a wonderful ice queen type person. Olivia Wilde could also be amazing.

Tell us about the first concert you went to. Who was it and where?

It was Warrant just after “Cherry Pie” came out. Lots of big hair and loud rock. It was awesome fun. I went with a couple of friends from school.

I love that you write in more than one genre. Is there one you haven’t dabbled in yet that you’d like to?

Writing a fantasy would be amazing. I’d just have to come up with the right story. Something a bit dark fairy-tale-ish, maybe. There have been some wonderful books out in that genre lately such as “The Cruel Prince” by Holly Black and “Caraval” by Stephanie Garber.

I just finished up a romance set in Portland, Maine, with a slight suspense element running through it which was fun. It’s based around a tattoo parlor.

Kylie Scott is a New York Times and USA Today best-selling author. She was voted Australian Romance Writer of the year, 2013 & 2014, by the Australian Romance Writer’s Association and her books have been translated into eleven different languages. She is a long time fan of romance, rock music, and B-grade horror films. Based in Queensland, Australia with her two children and husband, she reads, writes and never dithers around on the internet.