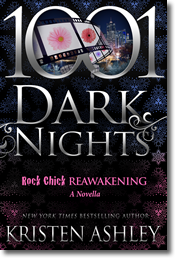 From New York Times bestselling author, Kristen Ashley, comes the long-awaited story of Daisy and Marcus, Rock Chick Reawakening. A prequel to Kristen’s Rock Chick series, Rock Chick Reawakening shares the tale of the devastating event that nearly broke Daisy, an event that set Marcus Sloan—one of Denver’s most respected businessmen and one of the Denver underground’s most feared crime bosses—into finally making his move to win the heart of the woman who stole his.

I loved loved loved this story! Was it hard to decide on this prequel of sorts for your novella?

Yes. I was never certain that I was going to tell Daisy and Marcus’s story because I adore Daisy to distraction and I knew what precipitated them getting together and it was heartbreaking. I didn’t want to be in that place with Daisy. Not to mention, I wanted to be certain to do their story justice. They were my most-asked-for secondary character couple. I wanted to do it right for Daisy and Marcus and I wanted to do it right for my readers. We’ll just say Daisy never lets anyone down. Neither does Marcus. So in the end it worked out for everyone!

And just a note of thanks to Liz Berry for cheering on this decision. If I didn’t have her enthusiasm, I might have forever shied away from telling this story. Thank God I had her and my sister Erika supporting me writing it or it might never have been told!

I adore all of your series and how they all have a very different feel. Is it ever hard switching gears from your paranormal to your contemporary work?

Nope. I love this. It’s nice to be in the real world (as such, since it’s fictional :-)) and then pop into a straight-up fantasy where anything but anything can go. I’m always ready to hit a paranormal/fantasy when the time comes and when it’s done, just as ready to spend time in your average, everyday bar or coffee shop (average, everyday with the addition of really hot guys). So it’s perfect for me.

If a movie was being made tomorrow starring Marcus and Daisy, who would you choose to play them?

It’s very hard for me to do this. My characters are real to me—real and complete—voices, mannerisms, looks. So I can’t put living people in their places. Though I will say that Kristin Chenoweth definitely gives me a Daisy vibe, but with bigger hair and daily use of sparkle!

If you weren’t writing, what do you think you’d be doing today?

In a real world or a fantasy world? Don’t answer, I’ll tell you. In a real world, I’d probably still be working in charity (I worked in charity all my professional career prior to writing). Though I like to think that I’d have attained what I could attain there and could look forward to work as a waitress in a biker bar so I could just do my job, stay active, and maybe have the stress of delivering the tequila shots without spilling any and making correct change (’cause I suspect bikers might frown on not getting correct change but I’m hopeless at math) but leaving any other stress “at the office.” Seriously. Yes, this is very Lauren in Sweet Dreams, but I’d always thought I’d do that, set up the retirement accounts and pay off the house then get a job where I can just do it well and go home. So that would be my fantasy world one too (if that fantasy world didn’t include dragons and such, if it did, I’d totally be a princess – a tough job I’m sure, but I’d rock it!).

Are you more of a plotter or pantser?

No plotting. I’ve never plotted. I wouldn’t even know where to begin. Totally a pantser.

Notepads and books for jotting all my varied jots. Three pen cups (one filled with Sharpies, one with gel pens – both these for signing, one filled with pink, teal and purple pens for moi). A desk organizer with stamps, notecards, hand lotion and lip balm. A beautiful bouquet of fake flowers that looks real. A fab-you-LAS lamp with lots of crystal and silver and danglies. A Smithie’s mug. A snow globe from Paris, Vegas. A Chuck Norris-a-Day calendar. A huge “Rock Chicks Rule” coaster a reader had made for me. A little Santa tea light holder that I keep on my desk all the time that I believe was hand painted by my great-grandfather before he died in WWI. And a stand for folders to put personal and business stuff in for my bookkeeper. Oh, and my huge, widescreen PC. I have a cluttered desk!

I just finished Complicated, an Audible exclusive book that I LOVE. I’m not sure if I’m more enamored with Greta, my heroine, or Hixon, my hero. We’ll just say I’m glad they came to me! Now I’m taking a bit of a breather during the holidays, writing a short story here and there that I don’t know what will come of them but I do know something will! I’ll kick into high gear in January when I’ll write Coert’s story, the finale to my Magdalene series.