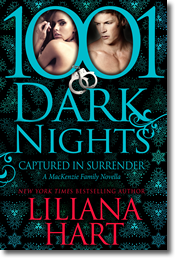 Bounty Hunter Naya Blade never thought she’d step foot in Surrender, Montana again. Especially since there was a warrant out for her arrest. But when her skip ends up in the normally peaceful town, she has no choice but to go after him to claim her reward. Even at the cost of running into the cop that makes her blood run hot and her sense of self-preservation run cold.

Deputy Lane Greyson wants to see Naya in handcuffs, but he’d much prefer them attached to his bed instead of in a cold jail cell. She drove him crazy once before and then drove right out of town, leaving havoc in her wake. He’s determined to help her hunt down the bad guy so he can claim his own bounty—her.

I love that all of your books have suspense in them.  What are some of your favorite suspense films and have any inspired you to write?

I am a complete and total movie buff. It’s one of my favorite ways to let my brain recharge between books, so movies are definitely an inspiration to my books. All of the Mission Impossible movies, Mr. and Mrs. Smith, James Bond, The Last Crusade, all of the Jason Bourne movies, and pretty much anything that has lots of explosions and great fight scenes. Or Angelina Jolie. She kicks ass.

You currently write a few different series…how hard is it to keep track of what’s going to happen next in each series?

Oh, man. It’s getting harder and harder to keep them all straightened out, but it also helps that they’re all so different. I’m a mega-spazz when it comes to writing, which is why I have to change things up and write such different series. It keeps things fresh for me so I don’t get bored and I think it keeps it fresh for readers too.

Hmm, what’s going to happen next in each series? That’s a loaded question if I’ve ever heard one <g>. I get a lot of emails asking this exact question, because as you know, I like to leave my readers wanting more at the end of each book.

Everyone is waiting to see what happens with Shane MacKenzie in my MacKenzie series. I can tell you with absolute certainty that you’ll probably cry a little at his story. But I think you’re going to really like his heroine too, and you’ll be just as relieved as I am for him to finally get his happily-ever-after in SCORCH. That’s really all I can tell you <g>.

I also left Addison Holmes in a bit of a pickle with the whole pregnancy test thing. I can’t tell you what’s going to happen in WHISKEY, YOU’RE THE DEVIL, because what fun would that be? Just know it will be a wild ride.

As far as the J.J. Graves Series, I can tell you that J.J. and Jack will be getting married in DOWN AND DIRTY. But they’ll be solving a doozy of a crime while trying to get down the aisle.

Your steamy scenes in Captured in Surrender are pretty amazing and delicious.  What do you think the hardest part of writing a great sex scene is?

Should I admit that I love writing the sex scenes and they come pretty easy? No pun intended <g>. I’d say in general the hardest part of the sex scenes are making sure it’s not just body parts involved, but also emotions and dialogue. I think that’s what makes my sex scenes different. I love for my H/h to talk during sex.

Lane and Nayaare a great pair and I loved their story.  What made you choose them for your novella?

Well, sometimes people just pop into my head for no reason. Naya was one of those people, and I couldn’t get rid of her. But at the same time I wasn’t sure what book she belonged in. (I’m seriously amazed every day that men in white coats don’t try to have me committed, because I know that sounds crazy). I also figured she’d be a great fit in the MacKenzie universe, but I knew she wasn’t the heroine for any of the MacKenzies. But I thought she’d be perfect for one of their friends, so Lane Greyson was born and they hit it off immediately in my head.

Lane and Nayaalso make one hell of a bad-guy-ass-kicking team.  Will we see more of them in the MacKenzie Series?

It’s possible. I never know who’s going to show up when I start writing a MacKenzie book. They pretty much do and say what they want.

How much fun is it to work with police for you book research?  Have there been any intense moments?

I love, love, love getting to do research for my books, and I’ve met a lot of great people who do very intense and dangerous jobs, and my respect for them is at the highest possible level. Many of them have also become good friends. I’ve gotten to do some pretty incredible things in the name of research, and these guys are greatat getting the adrenaline going whether in a dangerous situation or not. I love going to the range and shooting, but I also really enjoy sitting around a table with a bunch of cops and just listening to them talk. Most of my characters come from real life people.

I really admire the work you’ve done with the Prevent Cancer Foundation (I loved Kill Shot).  And now we have another opportunity to donate though pre-orders of Crave…how is it going so far?

It’s going fantastic! Thanks so much for asking. We’re on pace to more than double the amount we raised last year. The Prevent Cancer Foundation is a fantastic organization, and their focus is specifically on cancer research and finding ways to fight and cure such a terrible disease. And for anyone who doesn’t know what’s happening, I lost my father to cancer almost a year ago, so I’m donating $1.00 of every pre-order of CRAVE (which is the next book in the MacKenzie series) to the Prevent Cancer Foundation. I’m really excited to be partnering with them again. They do great work.

In your bio, you write that you taught music.  Do you have any favorite memory of those years?

Hahahahaha! If you’ve read the Addison Holmes series then you’ve already read a lot of those favorite memories. Every day was an adventure. That’s probably the safest thing to say.

Ok, so I know you’re a fellow shoe junkie.  What is your absolute dream pair?

Shoes…I love shoes. So much. I’m a Louboutin girl, but I also really like Pedro Garcia and St. Laurent. Every pair I see that I want is a “dream pair.” I don’t have a lot of restraint when it comes to shoes.

Is there anything you just HAVE to have next to you to snack on while you write?

I feel like I’m confessing a naughty sin. I will go through boxes and boxes of Milk Duds when I’m on deadline. It says 30% less fat on the box, so I figure I’m being pretty health conscious. I try to set a good example.