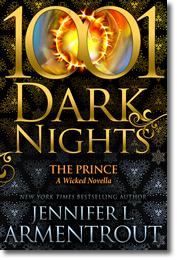 She’s everything he wants….

Cold. Heartless. Deadly. Whispers of his name alone bring fear to fae and mortals alike. The Prince. There is nothing in the mortal world more dangerous than him. Haunted by a past he couldn’t control, all Caden desires is revenge against those who’d wronged him, trapping him in never-ending nightmare. And there is one person he knows can help him.

She’s everything he can’t have…

Raised within the Order, Brighton Jussier knows just how dangerous the Prince is, reformed or not. She’d seen firsthand what atrocities he could be capable of. The last thing she wants to do is help him, but he leaves her little choice. Forced to work alongside him, she begins to see the man under the bitter ice. Yearning for him feels like the definition of insanity, but there’s no denying the heat in his touch and the wicked promise is his stare.

But there’s someone out there who wants to return the Prince to his former self. A walking, breathing nightmare that is hell bent on destroying the world and everyone close to him. The last thing either of them needs is a distraction, but with the attraction growing between them each now, the one thing he wants more than anything may be the one thing that will be his undoing.

She’s everything he’d die for….

I adored this story and Brighton and Caden. How did you decide to feature them in this novella?

I knew I wanted to tell Caden’s story, because of his complicated and tragic past. In the Wicked Series, you only see one side of him—the pretty much, downright evil side. I also wanted to tell a story that involved Brighton. When you see her in Wicked, she’s rather timid and somewhat sheltered due to what happened to her mother. She’s not a fan of the fae, so pairing her with someone like the Prince was a lot of fun.

If you could dream cast them, who would you choose?

I’m terrible at dream casting, so I pick Theo James for literally every male role. Theo James. He could also play Brighton. It would just be Theo James making out with Theo James. I’d watch that.

How do you choose your character names? (btw I loved these names!)

Usually the names have a meaning that’s revealed in the series. Picking character names is one of the hardest, because you have to really love the name and feel drawn to it. I scour baby name registries, Twitter followers, etc.

I love that you write in a few different genres. Are there any other genres you’d like to write in?

I’d love to write a historical romance, but I’m far too lazy to do the research necessary to write one.

Do you have any fun or interesting things you do before you sit down to start writing a new book? Like get a certain snack, find the right music, wear a certain pair of slippers…

When starting a new book, I clean my computer of files, screenshots, saved pictures, etc. It’s very therapeutic to do it.

I’m about to start working on the sequel to The Darkest Star. I’m excited to get back into the world and continue telling the story of Evie, Luc, Daemon, Kat, and crew.