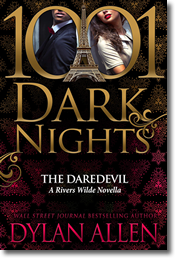 It was the wickedest of propositions, made by the most devilish of men.

It doesn’t matter that Tyson Wilde has got a killer smile, wears a suit like it’s his job,
and oozes spine-tingling sex appeal. I should say no.
Because beneath the surface of that cool, disinterested exterior,
lies passion hot enough to burn. I danced too close to it once and have the scars to prove it.

So, on any other night, in any other city, and if he’d been even a fraction less mouthwatering,
I would have been able to resist.

And this time, no matter how right we feel together, I won’t let myself forget that when this weekend is over, we will be, too.
We’re only pretending to be lovers to land a deal.
Success will mean a promotion—one I want more than anything.
At least, that’s what I thought.

Falling in love was a danger neither Tyson or I saw coming.
And it will cost one of us everything.

An Exclusive Interview With Dylan Allen:

OMG I loved Tyson and Dina so much! How did you choose them for this novella?

Yay, thank you. I love them, too! Tyson is the only character who has been a secondary character in the previous three books. Readers love him, and I’ve been asked about his book since I published The Legacy. Thankfully, I love him, too. His strong personality and the role he plays in the family dynamic was begging to be explored.

But I had to wait until I found a woman who could go toe to toe with him. He’s ultra competitive, and a series taskmaster, so I knew she’d have to be special.

Dina was a secondary character in a stand alone story of mine and she stole every scene she was in. I shouldn’t have favorites, but if i had to pick a favorite heroine, it would be her.

I knew I had to find a way to get her to Rivers Wilde for Tyson and she made her first appearance in The Jezebel.

I’m so happy I was able to bring them together, they are perfect for each other.

And, can we just talk about the setting for a second? Paris *dreamy sigh*. How did you decide on that city?

I’ve got a serious case of wanderlust. And I’ve been using my books to travel since my very first one which was set in London. Nearly every book I’ve written has at least a few scenes set in a city or country other than where my main characters live. And what better place for these two to seal the deal than the romantic city of lights? From the food, to the public gardens, to the museums, to the shopping, there’s an endless amount of delight to be had in that city. And that’s what I wanted for myself when I was writing and for my readers as they devour it.

Your book covers are simply sublime. How involved are you in the design process? Have you ever scrapped an idea?

Thank you! I can proudly say that I made all of my current book covers. Believe it or not, I’d never used photoshop two years ago. I scrap more ideas and drafts than I’d like to admit. But that’s the beauty of doing them myself ; The only person I run the risk of annoying is me!

You are such an inspiration (everyone check out Dylan’s bio!). What is some advice you’ve gotten over the years to help you achieve your dreams?

The most resonant advice I’ve ever received came from my father. He was driving me to the airport to catch my flight to Albany, NY, where I was going to take the New York Bar exam. I’d been studying 7 days a week, 14 hours a day for three months and I was terrified. It’s the hardest bar exam in the country and I’m not a great standardized test taker. And my dad gave me a card and in it, he’d written “Faith or Fear. Choose, because you can’t have both.” Nearly twenty years later, I feel qualified to add this to that sage advice; You can, in fact, have both faith and fear. But you’re in charge of which emotion you allow to lead. So I say, fear is useful. It always lets you know what matters. The things that scare you, are the things you should chase. So, now, I say feel the fear and do it anyway. (I passed the bar, by the way!)

Can you give us a couple of lines from your current work in progress?

This is untitled, but coming to The Rivers Wilde universe:

“Of course I want you, Elena.” His deep voice is quiet now, but there’s nothing gentle in it. “If you knew how much you’d be afraid.”

His face is only inches away from mine now and even while my heart thunders, everything else slows down. I feast my eyes on his wide, voluptuous mouth, and lean in, just a little.

I understand why a fierce man like Zion might frighten some people, but he’s never scared me. “What do you want to do to me?” I whisper, my gaze settling on his mouth.

He cups my chin in one of his big, capable hands and tilts my face up so our gazes meet. His dark topaz eyes blaze into mine with a raw honesty that steals my breath.

“I want to tie you to my bed. Eat every meal with you. Eat you for every meal. Get involved in whatever hairbrained scheme you’ve cooked up. Forget my own ambitions just for the chance to know all of your secrets. Never let you go.” 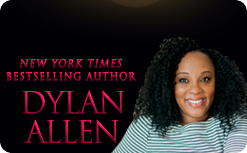 Wall Street Journal and USA Today Bestselling Author, Dylan Allen is a Texas girl with a serious case of wanderlust.

A self-proclaimed happily ever junkie, she loves creating stories where her characters find a love worth fighting for. When she isn’t writing or reading, eating, or cooking, Dylan enjoys planning her next globe-trotting adventure.

A reformed lawyer, Dylan lives in Texas with her amazing husband and two sons.