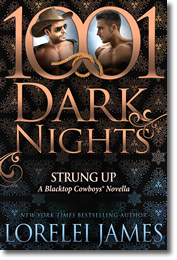 Rancher Creston Grant retreats from the world after he loses the love of his life….Can his former flame, rodeo cowboy Breck Christianson prove he’s a changed man who can give Cres a second chance at love?

An Exclusive Interview With Lorelei James:

Holy moly, Cres and Breck are off the charts HOT and I loved their story! How did you choose them for this novella?

Breck Christianson has been a recurring character in the Blacktop Cowboys series since Corralled and as the series has progressed, he’s become unhappier and on the verge of pissing everyone off because of his bad attitude—partially because he’s still in the closet. I wanted to break him and rebuild him into a different man, but I knew his character arc wouldn’t warrant a whole book. So in Roped In, when Sutton asked Cres if Breck had “taken care of him” when they were at the Denver Stock Show, a light went off inside my head. I knew then that Cres Grant was gay and hadn’t come out to his family either. In Stripped Down, Cres is out and starting a new relationship. Last fall when we were discussing possibilities for this year’s 1001 Dark Nights story, I pitched my idea to the publishers and they loved it, which sort of shocked me, to be honest. I don’t write male/male (I’ve written male/male/female ménage in Long, Hard Ride and Rough, Raw and Ready in the Rough Riders series) and they’d never published a male/male story, so I was really thrilled they said yes! But before I got to put Breck and Cres together on the page…I had to break Cres too. That was hard.

I adore this big extended family we always get to see glimpses of in your Blacktop Cowboy series. Do you keep a character bible of big giant flow chart somewhere?

I have documents in my computer that I can refer to—I wish I was more organized especially with these spin-off Blacktop Cowboys novellas I’m doing with 1001 Dark Nights since I keep adding more characters. Every time a new character appears that I didn’t expect, I say—ooh, that person intrigues me. Wouldn’t that make a great story? 🙂

Who would you dream cast as Cres and Breck?

No one knows them, but I saw a really hot picture of two guys, like smoking hot—they were shirtless and staring into each others’ eyes with an intensity that stole my breath. It’s an incredibly intimate image, more so than even if they’d been naked because there’s such raw emotion on their faces. My first thought was…those could be my guys!

I loved the way you wrote Beck’s accented dialogue. I totally pictured him in my head speaking that way! Is it ever difficult to write in that way?

Breck has an accent? Haha. I just write them how I hear them speak all around me, so I honestly don’t think about it. But yes, there is a distinct difference between writing a cowboy and writing a business executive from Minneapolis—like in the Need You series—or a martial artist from Denver—like in the Mastered series—or a military guy—like in the Rough Riders Legacy series. Even the internal monologue, especially if I’m writing in first person, has to fit who the character is on the outside as well as carrying that attitude and vernacular when he’s interacting with others. My biggest pet peeve is reading something that is NOT authentic, and this is never more true to me, than in western romance. Just slapping a cowboy hat and a pair of boots on a male character and plunking him down on “a ranch somewhere” doesn’t make him believable. I’m proud of staying true to what I know and see around here and I think my love of the western way of life and the men and women who embody it every day is obvious.

If you could live in one cartoon world, what one would it be?

My first thought was to say The Jetsons! But upon further reflection, I’d say Archer. I’ve recently started watching that adult cartoon and I’m crazy in love with it because it’s funny, dirty and wrong on so many levels—that fits my mood most days!

FULL DISCLOSURE: I’ve never played Mad Libs – so I’m going to cheat and drag out my Cards Against Humanity edition and do my own thing J — none of you are really surprised that I don’t always follow the rules.

These are the random cards I pulled out – main black question card: What’s my secret power? 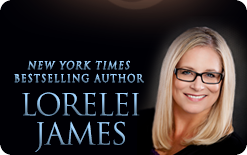 From Lorelei: “Why do I have a particular fondness for all things western? Well, I’m a fourth generation South Dakotan, living in the Black Hills, which is chock-full of interesting characters, including cowboys, Indians, ranchers, and bikers. The geographical diversity of the surrounding area showcases mountains, plains, and badlands. Living in and writing about rural settings gives me a unique perspective, especially since I’m not writing historical westerns. Through my fictional world, I can show the ideals and the cowboy way of life are still very much alive.”