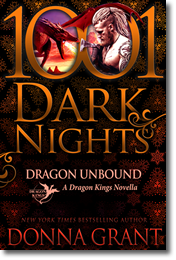 In a new story brimming with sizzling heat and untold mysteries, New York Times bestselling author Donna Grant brings together a devilishly handsome Dragon King and a woman who dares to challenge him.

He’s never been tempted…until her.

Sexy. Mysterious. Dangerous. He’s an immortal Dragon King bound by ancient rules and eternal magic. Cullen has one objective: find and destroy the evil that threatens the new home of the dragons. Just when he’s closing in, he’s ambushed and finds a stunning warrior woman fighting alongside him. No amount of magic could prepare him for the beguiling lass who spurns his advances and defies him.

From the moment Tamlyn takes a stand against her kind, she’s had to fight one perilous battle after another. Staying alive in an endless struggle, and the lines between good and evil are blurred with every encounter. She’s always stood alone—until she comes to the aid of an irresistibly handsome stranger. Cullen will force her to face truths she’s been running from…even as enemies plot to destroy them both.

When I began this spinoff series, there was this character who was always there. She didn’t show herself until I started thinking about writing Dragon Unbound, and then she came forward, ready to have her story told. I’d never had a Banshee in my books before, and it was a real treat getting to write Tamlyn.

Usually, it’s with a good meal, maybe have a bit of a cheat day and some sweet treat and an adult beverage.

That would be when Cullen shifts into dragon form over the city. The way he does it, the way Tamlyn sees him, what he sacrifices…yeah. I’d love to see that. 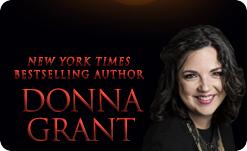