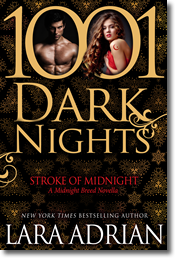 Born to a noble Breed lineage steeped in exotic ritual and familial duty, vampire warrior Jehan walked away from the luxurious trappings of his upbringing in Morocco to join the Order’s command center in Rome.

But when a generations-old obligation calls Jehan home, the reluctant desert prince finds himself thrust into an unwanted handfasting with Seraphina, an unwilling beauty who’s as determined as he is to resist the antiquated pact between their families.

Yet as intent as they are to prove their incompatibility, neither can deny the attraction that ignites between them. And as Jehan and Seraphina fight to resist the calling of their blood, a deadly enemy seeks to end their uneasy truce before it even begins….

An Exclusive Interview With Lara Adrian:

I just adored this novella and the chemistry between Jehan and Seraphina! How did you choose them for this story?

I’m so glad you enjoyed STROKE OF MIDNIGHT! Jehan definitely snagged my attention while I was writing TEMPTED OF MIDNIGHT, which is where we first meet him as part of the Order’s command center in Rome. Given that he was half-Moroccan (and half French!) I knew I could really have some fun with an exotic setting and a story setup that we haven’t seen in the Midnight Breed series thus far. Pairing Jehan with a modern, equally resistant heroine like Seraphina made writing this “arranged mating” story even more fun. I hope readers enjoy it too!

Speaking of novellas, is it ever difficult to put in enough of the story without writing a full-length book?

Sometimes it is, yes! With a novella, I tend to exclude the kind of series story arc subplots and secondary characters you see in my full-length novels, and train all of my focus on the main characters and their romantic journey. I also try to make my novellas as standalone as possible, so that each one can be an introduction to the series for new readers.

Having been to Morocco myself, I loved all of the detail you put into this story. Have you visited? Is there anywhere you have written that you’re dying to go to?

Oh, I’m jealous that you’ve been there! Unfortunately, I’ve only visited Morocco via Google and photographs online. As for places I’ve set books and wish I could travel to, I’d love to see the Czech Republic’s mountain park that was part of the setting in Midnight Rising (Book 4). And I’d also love to see Mont St Michel, which I used in one of my historical romances, Heart of the Hunter. One of these days!

The Breed world is so large and contains so many characters…do you have a series bible or flowchart up in your office?

I have a series bible (which I later published as The Midnight Breed Series Companion) and I also have an evolving set of notes, since the Companion only carried the series through Darker after Midnight (Book 10). No flowcharts or family trees in my office, though. Maybe I should do that!

Ha! I’ve recently organized, so it’s not the chaos zone it usually is. Let’s see… Three pairs of reading glasses and about that many spiral notebooks containing to-do lists and story ideas I don’t want to forget. A small stack of books I need to sign from Facebook and newsletter giveaways. My laptop, which I’m typing on now, and my desktop, which I hardly use. Some Reese’s peanut butter cups from the package of Halloween candy I bought a few weeks early (ahem). And, finally, my FitBit, which I really need to put back on and either resume the self-shaming or get off my butt and chart some steps to work off the aforementioned peanut butter cups. 🙂

With one of my favorite holidays coming up, Halloween, I’m dying to know if you get fan pics of themselves dressed as a Breed character? And who would YOU dress as?

I love Halloween too! And not just for the candy, although… I see a lot of Breedmate mark tattoo photos from fans, but not so much the costumes. If I were to dress up as one of my characters, it would probably be Tavia or Carys in all their kickass, daywalking Breed female glory—amber cat’s eye contacts, fangs, and dermaglyphs.

What are some books that have released this year that you’re dying to read?

I really want to read THE MARTIAN by Andy Weir. In romance, I pretty much gobble up everything I want to read as soon as it comes out, but I do need to catch up on Meredith Wild’s Hacker series, and J. Kenner’s Stark series spinoffs. And I hate this kind of question because as soon as I send off my answer, I think of a dozen other titles I want to read!

You do a tremendous job on social media. Do you ever find it hard to balance?

Oh, thanks! I really enjoy social media and being able to talk directly with my readers and offer them fun things to win or take part in. I do feel it’s hard to keep up with every new social network that pops up, so I tend to spend the most time at my favorites: Facebook and Instagram, plus Twitter and Goodreads. But I also keep in touch with readers via my website newsletter, which goes out about once a month. I guess I don’t worry too much about balance! *g*

I’m working on the next Midnight Breed novel, which I anticipate will be out in the spring next year, followed by another Midnight Breed novella for the 1001 Dark Nights 2016 collection. Yay! And I’m also working on a non-paranormal series that I will be announcing—and releasing—next year as well. Plus a few other exciting things! 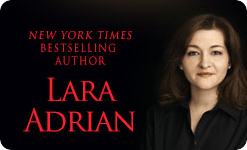