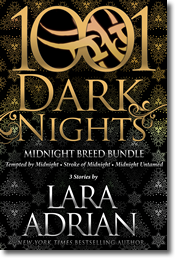 Once, they lived in secret alongside mankind. Now, emerged from the shadows, the Breed faces enemies on both sides—human and vampire alike. No one knows that better than Lazaro Archer, one of the eldest, most powerful of his kind. His beloved Breedmate and family massacred by a madman twenty years ago, Lazaro refuses to open his heart again.

Sworn to his duty as the leader of the Order’s command center in Italy, the last thing the hardened warrior wants is to be tasked with the rescue and safekeeping of an innocent woman in need of his protection. But when a covert mission takes a deadly wrong turn, Lazaro finds himself in the unlikely role of hero with a familiar, intriguing beauty he should not desire, but cannot resist.

Melena Walsh has never forgotten the dashing Breed male who saved her life as a child. But the chivalrous hero of her past is in hard contrast to the embittered, dangerous man on whom her safety now depends. And with an unwanted—yet undeniable—desire igniting between them, Melena fears that Lazaro’s protection may come at the price of her heart….

Born to a noble Breed lineage steeped in exotic ritual and familial duty, vampire warrior Jehan walked away from the luxurious trappings of his upbringing in Morocco to join the Order’s command center in Rome.

But when a generations-old obligation calls Jehan home, the reluctant desert prince finds himself thrust into an unwanted handfasting with Seraphina, an unwilling beauty who’s as determined as he is to resist the antiquated pact between their families.

Yet as intent as they are to prove their incompatibility, neither can deny the attraction that ignites between them. And as Jehan and Seraphina fight to resist the calling of their blood, a deadly enemy seeks to end their uneasy truce before it even begins….

The mission was supposed to be simple. Infiltrate an enemy’s stronghold outside Rome and eliminate its leader. For a Breed warrior as lethal as Ettore Selvaggio, AKA “Savage”, stealth assassinations are only one of his many cold-hearted specialties. But the last thing Savage expects to find behind enemy lines—in his target’s bed—is a woman he once adored.

It’s been years since Savage last saw beautiful Arabella Genova. Years he’s strived to banish to his past, along with the fierce desire he once felt toward Bella . . . and the irresistible calling of her blood that stirs in him even now, despite the fact that she belongs to another male.

But when fate throws Savage and Bella together again in a race for their lives, will his long-lost love prove to be the one woman he can’t live without, or the perfect weapon to destroy him?