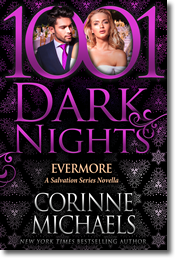 I was poised to become partner at my law firm even before I became secretly engaged to my boss. After being humiliated by him on my wedding day, I can’t face working for him any longer. So I quit, waving my middle finger on my way out.

Now the only things I’m poised for are unemployment and loneliness.

When an opportunity with Cole Security arises, it seems like the perfect way to run, all the way to Virginia Beach. I wasn’t expecting my childhood sweetheart to be there. I definitely wasn’t prepared that when we saw each other again, Benjamin Pryce would be so grown-up. So gorgeous. So Navy SEAL-ish.

And still the same guy who broke my heart when I was fifteen–and could do it again.

They say if you’re fooled once, shame on them. The second time, it’s on you. The third time, it’s going to be me that runs… unless he can convince me to stay forevermore.

An Exclusive Interview With Corinne Michaels:

Oh, how I loved this novella! How did you choose Ben and Gretchen for this story?

I’m so glad you loved it! Gretchen was one of those characters that was always hovering in the back of my mind. She’s Catherine’s best friend and had two of my favorite lines in Beloved. It was as if she was in my heart, I just wasn’t sure what how or what to do to bring her forward. Ben was a character in the Cocktales Anthology and I loved him instantly. I knew he needed a story and Gretchen became very clear at that point.

Both of these characters have been put through the emotional ringer in their pasts. Is it ever challenging to write heartbreak?

I wish it was challenging but I seem to thrive in that part. I love when broken people find themselves whole because of love. You know? There’s this really beautiful thing about that sentiment. So, I make it hurt so that the beauty is there at the end.

If you could dream cast Ben and Gretchen, who would you choose?

Oh! I always love this question! Blake Lively for Gretchen. She’s poised but still can have fun. I feel like she would be perfect as her. For Ben, that’s such a hard one . . . I’m still not 100% sure on him because I would say Ryan Reynolds, but I feel like that’s just because of who she is. But he’s who I keep going back to.

Ben would’ve wanted it to be super special for her considering all the bad ones she had. I think he’d take her home. I know that sounds lame, but for Gretchen, she missed New York in some ways. Us Jersey girls love our home no matter how much others think it’s the armpit of America. We’re loyal to that state and I believe he would want her to have some memories that he gave her there. Probably a trip up there, dinner, a play, and loving her there.

I’m working on Indefinite! Which is Ashton and Quinn’s story. Ashton is one of those heroines I’ve loved from minute one. She’s feisty, fun, and knows what she wants, but when it comes to Quinn . . . she can’t seem to help herself. These two have so much to work through, it’s a lot of fun. 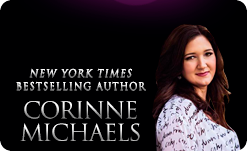 Corinne Michaels is the New York Times, USA Today, and Wall Street Journal Bestselling author of The Salvation Series (Beloved, Beholden, Consolation, Conviction & Defenseless), Say You’ll Stay, Say You Want Me, and Say I’m Yours. She’s an emotional, witty, sarcastic, and fun loving mom of two beautiful children. Corinne is happily married to the man of her dreams and is a former Navy wife. After spending months away from her husband while he was deployed, reading and writing was her escape from the loneliness.

Both her maternal and paternal grandmothers were librarians, which only intensified her love of reading. After years of writing short stories, she couldn’t ignore the call to finish her debut novel, Beloved. Her alpha heroes are broken, beautiful, and will steal your heart.