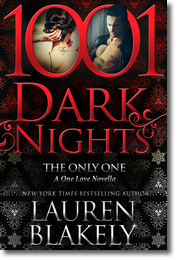 (A One Love Novella)

From the New York Times bestselling author of THE SEXY ONE comes a romance about fate and second chances.

Let’s say there was this guy. And he gave you the most mind-blowing night of sex in your life. And you never saw him again.

Now, it turns out he’s the ONLY ONE in all of Manhattan whose restaurant is available for my charity’s event.

The trouble is, he doesn’t recognize me.

This woman I’m working with is so damn alluring. The first time I set eyes on her, I’m captivated and I can’t get her out of my mind. Even if it’s risky to tango with someone I’m working with, she’s a risk I’m willing to take.

The trouble is, she won’t give me the time of day.

But I’m determined to change that.

An Exclusive Interview With Lauren Blakely:

I absolutely LOVED this story and the relationship between Penny and Gabriel! How did you choose them for this novella?

As I was writing Gabriel into his supporting role in THE SEXY ONE I kept thinking he had the right ingredients to become a hero himself — sexy, witty, tattooed and a chef! As for Penny, she loves dogs and had a fun repartee with Nick and Wyatt in Well Hung, so she called out to me for her own story too! When it was time to write THE ONLY ONE, I immediately envisioned them having met in Europe years before in a whirlwind romance that ended far too soon. Voila!

I loved the chef aspect of Gabriel. Are you a foodie yourself?

Ummmm…I don’t even cook. Unless you count boiling water for mac & cheese or making toast. I rock at toast.

I had a switch installed in my brain, so I just flip it when I need to switch genres. Piece of cake! But seriously, I don’t find it too difficult. The characters and their goals are what drive the type of tale I’m telling. So, if a character were in pursuit of justice over a decades-old murder, the story would naturally be more suspenseful. If a character accidentally marries his assistant, the story would lend itself more to comedy.

Yes! I’m almost done writing THE HOT ONE. That releases in March, and it’s a sexy standalone romance. The heroine is Delaney and she’s Penny’s best friend from THE ONLY ONE! The hero is Tyler and he’s Simon’s buddy from THE SEXY ONE. It’s one big, sexy world of romance and humor in New York City!

Ok, so for 2016 I am going to be playing Mad Libs with the 1,001 Dark Nights authors for a bit of fun! Here is Lauren’s Mad Libs titled “How to Date the Coolest Guy In School”:

It’s simple: Turn the kerfuffles and make him want outrageously to date you. Make sure you’re always dressed to unravel. Each and every day, wear a plaid vest that you know shows off your eyelashes to luscious advantage and makes your cupcake look like a million acrobatics. Even if the two of you make meaningful tip of the nose contact, don’t admit it. No hugs or bangles. Just shake his earlobes firmly. And remember, when he asks you out, even though a chill may run down your package and you won’t be able to stop your larceny from devouring, just play it tasty. Take a long pause before answering in a very silvery voice, “I’ll have to lavish it over.” 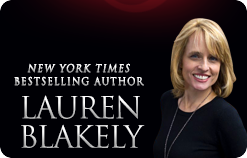 Lauren Blakely writes sexy contemporary romance novels with heat, heart, and humor, and she has had eight books on the New York Times Bestseller list and sixteen on the USA Today Bestseller list. Like the heroine in her novel, FAR TOO TEMPTING, she thinks life should be filled with family, laughter, and the kind of love that love songs promise. Lauren lives in California with her husband, children, and dogs. She loves hearing from readers! Her bestselling series include Sinful Nights, Seductive Nights, No Regrets, Caught Up in Love, and Fighting Fire. She recently released SINFUL LONGING, the third bestselling title in her NYT Bestselling SINFUL NIGHTS series. In January, she’ll release BIG ROCK, a sexy romantic standalone romantic comedy. She also writes for young adults under the name Daisy Whitney. To receive an email when Lauren releases a new book, text BLAKELY + your email address to 678-249-3375 (please use the actual + sign).