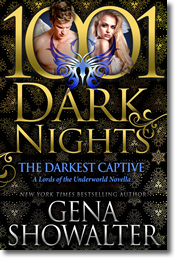 For centuries, Galen the Treacherous has been the most hated immortal in the Underworld. With good reason! This bad boy of bad boys has lied, stolen, cheated and killed with abandon. Possessed by the demons of Jealousy and False Hope, he has always lived for a single purpose: destroy everything.

Then he met her.

Former demon turned human femme fatale — Legion Honey — sought to kill Galen, but ended up parting with her virginity instead. Afraid of their sizzling connection, she ran away…and ended up trapped in hell, tortured and abused in the worst of ways. Now she’s free, and a shell of herself, afraid of her own shadow.

Galen’s hunger for Legion has only grown. Now the warrior with nothing to lose must help her rekindle the fire that once burned inside her. But as desires blaze white-hot, will Legion run again? Or will the unlikely pair succumb to love at long last?

OMG I loved Galen and Legion SO MUCH! How did you choose them for this novella?

Thank you thank you. You totally made my day!

I’d been torturing Galen as a side character for years, basically taunting him with what he wanted but couldn’t have. (In my defense, he deserved it.) Finally, I felt like he’d suffered enough. Legion, as well. I just, I wanted to see her remerge into the world. Like the butterfly that represents the entire Lords of the Underworld series. She had to fight her way out of the cocoon in order to fly.

Who would you choose to play Galen and Legion in a movie of The Darkest Captive?

I think Ryan Reynolds has a sexy, sarcastic, and wonderfully warped sense of humor that perfectly fits Galen. As for Legion, I’d have to go with the super talented Blake Lively. Not only could Blake capture Legion’s vulnerability, I believe she could showcase Legion’s transformation into a strong and powerful warrioress. Also, Ryan and Blake are married in real life, and their chemistry is off the charts!

What’s the most useless talent you have?

You mean besides eating an entire box of Drumsticks in one day? Who am I kidding—that isn’t useless, that is priceless! Let’s see, let’s see. Oh! Here’s one. I’m never grossed out. I can talk about the most disgusting stuff while eating—or watch something disgusting while eating—and I can write while my dogs fart-up my office.

If you could bring one of your characters to life to spend an hour with, who would it be?

Probably Katarina Joelle from The Darkest Torment, because she trains hell hounds for a living. I have seven rescue dogs who think manners are woofing ridiculous. (And yes, yes I did just use “woof” as a curse word.) Seriously, two of my precious canines just tried to eat my fingers when I passed out treats.

Do you have any stories you’ve written that will never see the light of day? If you do, can you tell us a little about one?

I do! Heaven’s Fury is the first book I ever wrote, and it featured everything I’d ever read and loved about other romance novels. Meaning, yes, it was a contemporary-science fiction-fantasy-paranormal-comedy-drama-time travel-historical, all rolled into one.

I’m working on book two in my Gods of War series. No title yet, but the hero, Bane, is a shapeshifting beast. A dragon/phoenix-like monster. The heroine can control him with her voice. Needless to say, he’s not her biggest fan. But boy oh boy does he crave her! Lots of action, and hot hot hot.