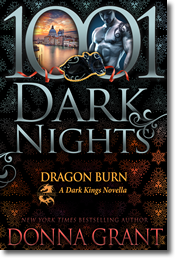 In this scorching Dark Kings novella, New York Times bestselling author Donna Grant brings together a determined Dragon King used to getting what he wants and an Ice Queen who thaws for no one.

A promise made eons ago sends Sebastian to Italy on the hunt to find an enemy. His quarry proves difficult to locate, but there is someone who can point him in the right direction – a woman as frigid as the north. Using every seductive skill he’s acquired over his immortal life, his seduction begins. Until he discovers that the passion he stirs within her makes him burn for more…

Gianna Santini has one love in her life – work. A disastrous failed marriage was evidence enough to realize she was better off on her own. That is until a handsome Scot strolled into her life and literally swept her off her feet. She is unprepared for the blazing passion between them or the truth he exposes. But as her world begins to unravel, she realizes the only one she can depend on is the very one destroying everything – a Dragon King.

Oh, how I loved this novella. Gianna and Sebastian together are incredible! How did you choose them for this story?

That makes me so happy. I fell in love with the characters!

I’d known for a few books that Sebastian was going to be the hero, but it wasn’t until I sat down to write the book that Gianna developed right there on the page. She was everything she needed to be for Sebastian and the story.

If you could cast a movie for Dragon Burn, who would you cast to play Gianna and Sebastian?

I know some authors have these amazing boards they create for their characters from their descriptions to what they eat and where they live. I’ve had a few where an actor I think would be perfect for a certain character, but it’s so rare for me. I create the characters out of my imagination, so there isn’t any one actor that I can think of who could accurately play who I’ve created. Unless, of course, the characters could pop out of my head. lol

How do you choose your character names? Is there any name you’re dying to use but haven’t yet?

I use several sources for names. I’ve got a naming source book, I also use BehindTheName.com, and then I have a list of names that I keep when I run across something I find interesting. Sometimes it’s a matter of just liking a name. But…I have had a few instances where I’ve chosen a name and after a page or two of writing I realize it doesn’t fit the character. And oddly, it’s always the woman’s name I change. For DRAGON BURN, I sat on the name Gianna for years, waiting on the right time to use it. As soon as I knew I was setting the story in Italy, I had the name.

You always paint such a beautiful pictures of the surroundings your stories. Have you been able to visit a lot of the places you write about?

Thank you! That means a lot, especially since I think the one thing I need to continually work on in my writing is descriptions.

While I have been to Scotland a few times, I’ve not made it to Italy/Venice. Yet. I spent a few days immersing myself in everything about Venice before I started writing so I could hopefully incorporate enough of it within the story. One of my favorite parts was searching houses for sale to get an idea of what the inside would look like. I found about a dozen I wanted.

It helps that I’ve always wanted to visit Venice, so it was no great hardship to find all the places I’d like to see if I went.

Right now I’m finishing up the last LaRue book – MOON BOUND – and about to dive back into my medieval England world of The Kindred for EVERWYLDE.

I’m juggling five different series right now (Dragon Kings, Reapers, The Kindred, Heart of Texas, Sons of Texas), so I get to move from contemporary to historical and werewolves/witches/Fae/Dragon Kings/Reapers to military/cowboys. It’s a wild ride!