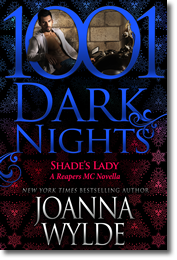 Looking back, none of this would’ve happened if I hadn’t dropped my phone in the toilet. I mean, I could’ve walked away from him if I’d had it with me.

Maybe it was all over the first time he saw me, and he would’ve found another way. Probably—if there’s one thing I’ve learned, it’s that Shade always gets what he wants, and apparently he wanted me.

Right from the first.

An Exclusive Interview With Joanna Wylde:

I loved Shade and Mandy’s story so much! How did you choose them for this novella?

As president of the Reapers Motorcycle Club, Shade has been a background character in several of my other books. I’ve had readers ask for his story, but until I got the idea for Mandy’s character I just wasn’t ready. Then I woke up one Saturday morning with Mandy’s whole life history in my head. I knew she’d be perfect for Shade.

When I started writing, I really thought they’d just be a short story but they kept talking to me. Then they grew into a novella, and now I think it’s safe to say they’re a full book, LOL. Sometimes the story doesn’t go quite the way you expected it!

The soft side Shade has toward Mandy is just fantastic. Is it ever a challenge to give a character those different layers?

I think it’s technically challenging as a writer to portray a character in such a way that the person in your head translates into someone the readers can empathize with, but the characters themselves tend to be very fully developed in my head. I don’t have to sit down and try to come up with a soft side or an emotional angle for my heroes… I don’t change who they are, either. They’re in my head, they’re real and they have their own personalities.

Once a character comes to life in my imagination, all I really do is throw them into a given situation and see what they do. Sometimes they surprise the hell out of me.

I started out by doing a lot of research into motorcycle clubs, and learned early on that road names are commonly used among bikers for a wide variety of reasons. From there I started looking at real bikers’ names. I developed my own character names based on those.

It’s always bemused me that one of the earliest critiques of my books was that the names were too unrealistic. Readers informed me that no real biker would have a name like Picnic (who was the president of the motorcycle club I was writing about). They didn’t realize that road names are often whimsical or inspired by specific events.

I took Picnic’s name from the obituary of a real biker in an outlaw club, although his name wasn’t actually Picnic. It was Picnic Table. To be honest, I can’t remember where Shade’s name came from, but it seems to suit him just fine.

Who are some authors you have read that inspired you to write?

Oh, so many over the years! I think the ones who have had the greatest, direct influence on me are those early indie pioneers who broke all the rules about what romance was “supposed” to be. I remember reading Kristen Ashley, Tracey Garvis Graves and Jamie McGuire and thinking, “But you can’t do that!”

And yet, they did do that and it was amazing. I suddenly realized that I could sit down, write the story that I wanted to write (even if it was crazy) and that’s where my book Reaper’s Property came from. They gave me the courage to go for it. I think that’s why working with 1001 Dark Nights has been exciting for me — it’s full of ambitious, risk-taking authors who broke ground for women like me. That kicks ass on every level.

Can you give us a hint as to what you’ll be writing next?

I’m starting a new series about the Devil’s Jacks Motorcycle Club, featuring Taz, a character some of my readers met in the Reapers series. It’s set in Portland, Oregon, and I’m having a great time incorporating the unique Portland vibe. We have close friends and family there, so we visit fairly often. Not only that, Abbie, the heroine, works in a cancer agency as a grant writer. I wrote grants to fight cancer for eight years, so I’m really feeling this book on a personal level.

On that note, I hope that everyone who reads this interview is taking the time to do their breast self exam this month… One in eight women will get breast cancer, but it’s got a 99 percent survival rate if you catch it early!

Thanks so much and I hope you enjoy Shade and Mandy’s story.

Joanna Wylde started her writing career in journalism, working in two daily newspapers as both a reporter and editor. Her career has included many different jobs, from managing a homeless shelter to running her own freelance writing business, where she took on projects ranging from fundraising to ghostwriting for academics. During 2012 she got her first Kindle reader as a gift and discovered the indie writing revolution taking place online. Not long afterward she started cutting back her client list to work on Reaper’s Property, her breakout book. It was published in January 2013, marking the beginning of a new career writing fiction.

Joanna lives in the mountains of northern Idaho with her family.