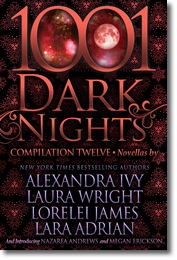 Kayden is obsessed with revenge after his parents disappeared when he was just a cub. Now the gorgeous Hunter has discovered the man responsible for betraying them – Joshua Ford – and it’s time for payback. Beginning with the kidnapping of Joshua’s daughter, Bianca. But last thing he expects is to be confronted with the horrifying realization that Bianca is his mate. Will he put revenge before his chance for eternal happiness?

Sexy male model, Simon refuses to give up his exciting life in New York City to return to the slow heat of the Wildlands. For a decade, many pantera have tried to capture the rogue Diplomat and bring him home, but all have failed. Now it’s Tryst’s turn. The hard, brilliant, and gorgeous, Hunter is the ultimate tracker. But can the admitted beast-girl of the Wildlands capture her prey without losing her heart in the process?

STRUNG UP: A Blacktop Cowboys Novella by Lorelei James

Rancher Creston Grant retreats from the world after he loses the love of his life….Can his former flame, rodeo cowboy Breck Christianson prove he’s a changed man who can give Cres a second chance at love?

The mission was supposed to be simple. Infiltrate an enemy’s stronghold outside Rome and eliminate its leader. For a Breed warrior as lethal as Ettore Selvaggio, AKA “Savage”, stealth assassinations are only one of his many cold-hearted specialties. But the last thing Savage expects to find behind enemy lines—in his target’s bed—is a woman he once adored.

It’s been years since Savage last saw beautiful Arabella Genova. Years he’s strived to banish to his past, along with the fierce desire he once felt toward Bella . . . and the irresistible calling of her blood that stirs in him even now, despite the fact that she belongs to another male.

But when fate throws Savage and Bella together again in a race for their lives, will his long-lost love prove to be the one woman he can’t live without, or the perfect weapon to destroy him?

Even when you know better….
There are a million reasons why Hazel Campton is off limits: she’s a journalist. I’m a cop. Oh, and she’s my foster sister.
My secret is I didn’t care. I haven’t stopped wanting her since I slept with her the night before she left.
She’s trouble. Always has been.

It’s hard to resist the thing you’ve always wanted…
Growing up with Brandon Archer means I know him. Good. Bad. Everything in between.
It’s just never mattered.
My secret? That night. The one I stole, that’s kept me from Archer and Green County, for four years.
Now I’m home, and nothing has changed. Except me. And not in the way that means a damn thing.
Because I still want him.

Everything can change with a knock at the door…
Secrets. Everyone has them. Archer. Me. This town.
Perfection only runs surface deep in Green County. When there’s a knock at me door, it’s a familiar face all covered in danger, and all those secrets we hide? They’re about to come tumbling out.

BITE THE HAND THAT BLEEDS by Megan Erickson

Roxy heads below the streets of Mission City to a vampire club, determined to give up her blood in exchange for much-needed cash. She has no idea that the handsome, brooding vampire she meets there will awaken desires she didn’t know she had, and will change her life forever…