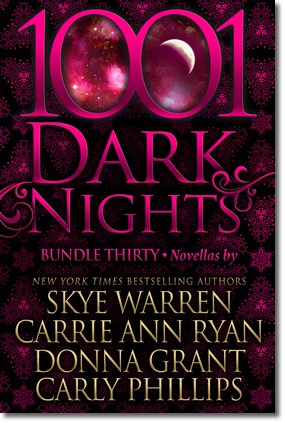 The Bishop by Skye Warren

A million dollar chess piece goes missing hours before the auction. Anders Sorenson will do anything to get it back. His family name and fortune rests on finding two inches of medieval ivory. Instead he finds an injured woman with terrible secrets. He isn’t letting her go until she helps him find the piece. But there’s more at stake in this strategic game of lust and danger. When she confesses everything, he might lose more than his future. He might lose his heart.

Taken With You by Carrie Ann Ryan

It all started at a wedding. Beckham didn’t mean to dance with Meadow. And he really didn’t mean to kiss her. But now, she’s the only thing on his mind. And when it all comes down to it, she’s the only person he can’t have. He’ll just have to stay away from her, no matter how hard they’re pulled together.
Running away from her friend’s wedding isn’t the best way to keep the gossip at bay. But falling for the mysterious and gorgeous bartender at her friends’ bar will only make it worse. Yet taking a chance with him might be the only choice she has. And the only one she wants.

Destinies can’t be ignored. No one knows that better than Annita. For as long as she can remember, it’s been foretold she would find a dragon. A real-life dragon. She’s beginning to think it was all some kind of mistake until she’s swimming in one of the many caves around the island and discovers none other than a dragon. There is no fear as she approaches, utterly transfixed at the sight of the creature. Then he shifts into the shape of a thoroughly gorgeous man who spears her with bright blue eyes. In that instant, she knows her destiny has arrived. And the dragon holds the key to everything.

Professor Shane Warden is on the verge of getting tenure. He never thought he’d see the day after a false accusation from a student years ago that nearly destroyed his career. But the moment he walks into class and lays eyes on the seductive blonde, he knows he’s in trouble.
Single mom Amber Davis is finally living her dream of going back to college. In the ten years since she dropped out to have a baby—and recover from his father’s death—it’s been the goal that always felt just out of reach. Until now. But one look at her hot, sexy professor, and Amber is head over heels in lust.