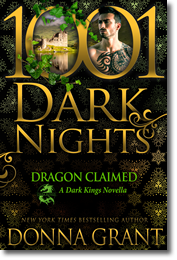 Born to rule the skies as a Dragon King with power and magic, Cináed hides his true identity in the mountains of Scotland with the rest of his brethren. But there is no respite for them as they protect the planet and the human occupants from threats. However, a new, more dangerous enemy has targeted the Kings. One that will stop at nothing until dragons are gone forever. But Cináed discovers a woman from a powerful, ancient Druid bloodline who might have a connection to this new foe.

Solitude is sanctuary for Gemma. Her young life was upended one stormy night when her family disappears, leaving her utterly alone. She learned to depend solely on herself from then on. But no matter where she goes she feels…lost. As if she missed the path she was supposed to take. Everything changes when she backs into the most dangerously seductive man she’s ever laid eyes. Gemma surrenders to the all-consuming attraction and the wild, impossible love that could destroy them both – and finds her path amid magic and dragons.

Oh, I absolutely loved this story! How did you choose Cináed and Gemma for this novella?

Thank you. Cináed has been simmering in my head for a while, and I’ve been waiting for him to tell me it was his time for a story. As soon as I knew it was his story, Gemma was there, waiting for me to delve into her character.

I also have to admit that I loved both of their names. How do you come up with your character names?

Lol. I’m glad! After over a 100 books, it’s difficult to find new/different names. I went back and forth over using Cináed’s because it was so different, but in the end he refused to let me change it. And Gemma, I love that name. I can’t believe I’ve not used it before. As soon as I read it, I knew it belonged to this character.

Gemma has an awesome and interesting career in this story. Where did your inspiration come from for that particular job?

It really came from trying to find a profession that would allow her to work from home. Then it moved into what would I do if my family had disappeared? Or really, what wouldn’t I do? It seemed natural that she would be a researcher since she would have spent years researching her own family.

If you could dream cast Gemma and Cináed, who would you choose?

This is always the most difficult question for me to answer. The characters are so vivid in my head that I can never find anyone who I think fits them perfectly. I would spend hours looking just to try and find someone who might work. lol

If you could give this novella a theme song, what would it be?

I’m actually working on book 16 in the Dark Kings series – FEVER – that releases in October. 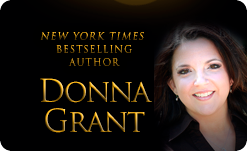