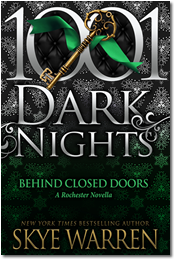 From New York Times and USA Today bestselling author Skye Warren comes the next installment in her Rochester series.

Marjorie Dunn is hiding in plain sight. The past can’t find her at the peaceful inn she owns in a quiet coastal town in Maine.

Until Sam Brewer walks through the door. He arrives in the dead of night, with a dark suit and storm-gray eyes.

Marjorie knows better than to trust this stranger, but she can’t resist his touch. Every kiss binds them together. Every night draws the danger close.

The past has caught up with her. And it wants her dead.

An Exclusive Interview with Skye Warren

My Rochester series is a steamy, gothic contemporary, and after a (spoiler alert) fire at their large house, they take refuse in an inn. And from the moment they stepped into the small, quaint lobby I knew that the innkeeper Marjorie had her own story with mysteries. Everyone has secrets at the fog-filled, fictional Eben Cape on the coast of Maine. I knew that Marjorie was hiding, building a home for other people with warm cups of a tea and a cozy fireplace because she herself was adrift. So when I had the opportunity to write a story for her, I knew that it was time for her past to finally catch up to her—in the form of a dangerous man with a hidden agenda.

I really should! Instead I start noodling on the next book or dive into my inbox, which has usually built up to terrifying proportions while I was in my writing cave. Every year I pick a word, though, and my word for 2022 is peace. I want to be more intentional about taking rest, rather than waiting until my body forces me to do it and I collapse. Even then I don’t think my celebrating will be about adding something, but about taking something away. Taking a walk or sitting by the pool or just existing without any demands on me. That sounds blissful.

Someone with a sense of humor, because you have to either laugh or cry when things get tough—and I’d much rather laugh!

I’m working on One for the Money which is about Eva Morelli, the eldest daughter of an old wealthy family whose past heartbreak keeps her from trusting again. And about Finn Hughes, the eldest son of a powerful family who has a secret—his father has a debilitating illness. As did his father before him. It’s hereditary. Finn knows there’s a ticking clock on his own mental abilities. So he manages the large family business the same way he’s done since he was eighteen, with his father as the reclusive figurehead. He knows better than to let anyone get close. He won’t marry. No one will have to take care of him. And he won’t have children. The dark legacy ends with him. They’re both hounded to date, to get engaged, to marry. A fake relationship is the perfect solution for both of them. Until it stops feeling fake… 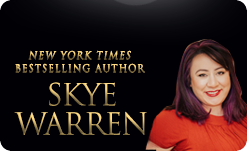 Skye Warren is the New York Times bestselling author of dangerous romance. Her books have sold over one million copies. She makes her home in Texas with her loving family, sweet dogs, and evil cat.