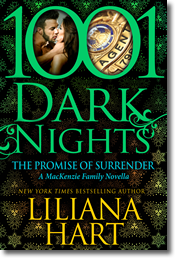 The Promise of Surrender

Mia Russo spent ten years working undercover, entrenched in the dregs of society before handing in her shield. Opening her own pawn shop is a piece of cake in comparison. All she needs is the bad attitude she developed on the streets and the shotgun under her counter to keep law and order. Until the day Zeke McBride walks into her shop.

Zeke knows Mia has every right not to trust him. He was the one who chose the next op instead of her. And all he can hope is that somewhere under the snarl and cynicism is a woman who can forgive. Because whether she trusts him or not, they’re going to have to work together to bring down the gang that’s decided Mia is their next target.

I absolutely loved this story. The heat between Mia and Zeke is so ridiculously HOT! How did you choose them for this novella?

Every book I write I try to pick characters different than I’ve ever written before. Mia came to me quickly and easily, and so did her backstory. I love female characters with a little attitude in them and who can hold their own. It actually took me a little while to figure out the kind of man who’d be her perfect match. It’s not easy finding a man who won’t be intimidated by an ex-undercover cop, tattooed, purple-hair-streaked pawnshop owner with a sawed off shotgun under her counter. And then Zeke walked in, and I could feel the sizzle across my skin, so I knew I’d found her match.

Having a really strong history between them made Mia and Zeke’s story wonderfully emotional. Did that make this novella easier to write?

Ugh…No…NEVER! Everyone’s got baggage, and bringing it all to the surface and clearing the slate is emotionally draining for them and me. I couldn’t wait to get to their happily-ever-after.

Speaking of history…how do you keep track of all of your characters and the relationships between them?

Ha! Talk about a challenge. I finally broke down and hired someone to write a book bible for every one of my series. But when old characters appear on the page, I rarely have to look up anything but their eye color. I know them all as well as I know some of my closest friends, and when they show up their attitude and conversations happen just as if they’d never left.

I adore the setting of Surrender, Montana. Is there anywhere you’ve visited that inspired it?

Not really. I love small town settings. It’s what I grew up in and what I’m familiar with. Surrender is a town purely created from my imagination.

Who would you cast as Zeke and Mia in a movie?

Tom Hardy as Zeke. All those muscles and tattoos…sigh… (Hold on and let me take a moment to regroup). As for Mia, that was a little tougher because she appeared a certain way in my head instead of an actor or actress coming to mind. But I think she’s closest in appearance to MMA fighter Gina Carano. They have very athletic sex.

It’s holiday season and that means gifts! What do you think Zeke and Mia would get each other this year?

I think they’d give each other the gift of travel. He’s a workaholic and she’s been dedicated to her shop for several years. They need the time away together without work. Maybe Hawaii. They’ll probably have very athletic beach sex if they go to Hawaii.

My desk is totally empty. Sadly, it’s the most wasted piece of furniture in my whole house. I can’t sit at a desk and write, so it stays nice and clean. The sofa on the otherhand…

I know you’re a fellow shoe lover. What is your latest favorite pair?

I recently bought a pair of Saint Laurent over the knee boots with heels that have pearls in them. They are super sexy. And I have no idea where to wear them, but they look amazing in my closet.

Can you give us a hint as to what you’re currently working on?

I’m currently finishing up TROUBLE MAKER, a brand new MacKenzie novel that’s coming in February 2016. I’ve also got WHISKEY TANGO FOXTROT about halfway finished, so it’ll be ready for release in April. And I’ve written a few chapters and started all the research prep-work for Shane MacKenzie’s novel, SCORCH, which will be coming in late summer 2016. I also have a super secret project I have to write next year that I can’t talk about (because it’s super secret right now). 2016 is insane.