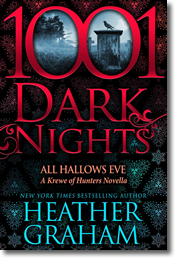 Salem was a place near and dear to Jenna Duffy and Samuel Hall — it was where they’d met on a strange and sinister case.

They never dreamed that they’d be called back. That history could repeat itself in a most macabre and terrifying fashion.

But, then again, it was Salem at Halloween. Seasoned Krewe members, they still find themselves facing the unspeakable horrors in a desperate race to save each other-and perhaps even their very souls.

I loved All Hallows Eve and really enjoyed Jenna and Samuel. What made you choose them for this novella?

Jenna and Sam met in Salem—and had handled a very heavy case there at the time. (The Evil Inside) I love Salem and since both my mother-in-law and father-in-law grew up in Mass, I’ve been able to spend a fair amount of time there. In this instance, I think it was important that they both grew up there and new the ins and outs!

I also loved that the story took place during Halloween. Had you always planned to write it happening during that time?

Yes—I love Halloween and have been to Laurie Cabot’s ball there at Halloween several times. Few places do up Halloween like Salem.

The legend in this story, the boo-hag, is pretty interesting. How did you decide to add that into this novella?

The boo-hag is just such a creepy entity—and not always at the fore!

Are there any secondary characters in the Krewe of Hunters series you’re just dying to write a story for?

Right now, I’m working on my Mira Krewe books for next summer—they all take place on particular historic cruise ships, the first heading out to the Caribbean, the second, Alaska, and the third, the Mississippi River. The three female protagonists met while working on a show in New Orleans and they’re friends—I’d love to bring them all back in a story.

Because it’s actually almost Halloween right now, I have to know: are there any horror films you just love watching?

Oh, dozens! Lost Boys, Warm Bodies, Zombieland (yes, funny and scary,) old Hammer films (The Raven, Fall of the House of Usher, etc.—so many based on Poe,) The Shining, A Nightmare on Elm Street (the first!) The Exorcist, Halloween (the first,) The Texas Chainsaw Massacre . . . I am a junkie. I love many. Also love spooky old gothic stories, and on TV, Penny Dreadful!

There’s also a haunted house attraction in this story that I loved. Have you ever visited a similar one?

If you’re in New Orleans, head to the Haunted Mortuary. Scary and great—the real history of the house is fascinating and happens to be right next to a Jewish cemetery. (On Canal Street!)

My phone plugged into my computer and the latest shoe the dog ate. Love the dog—she is so sweet and good. Eats nothing else—but my shoes when I forget and leave them down!

If you could dress up as any of your characters for Halloween, who would it be?

Hm. I’m not sure—I always liked a hanged pirate ghost named Bartholomew from the Bone Island Series. He’s a guy, but I have played Jack Sparrow at RT, so . . . ! (And the Mad Hatter, come to think of it!)

Can you give us a hint on what you’re working on now?

I have a new series that is straight suspense coming out in late March about an Irish American family that owns a pub downtown NYC on Broadway. The first book is called Flawless and introduces Kieran and the Finnegan family—and the FBI man with whom she becomes involved—and has to keep at a careful distance. Her problems stems from the fact that she never really knows what a couple of her unruly brothers have been up to in trying to help needy friends. Diamond heist have turned into diamond murders—and in trying to do the right thing, Kieran finds herself a hostage.

Thank you so very much for asking! 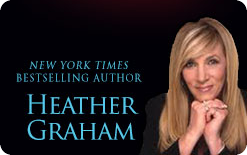