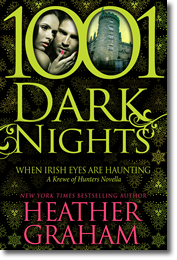 When Irish Eyes Are Haunting

Devin Lyle and Craig Rockwell are back, this time to a haunted castle in Ireland where a banshee may have gone wild —– or maybe there’s a much more rational explanation —– one that involves a disgruntled heir, murder, and mayhem, all with that sexy light touch Heather Graham has turned into her trademark style.

I loved Devin and Craig (aka Rocky) since reading them in your novel, The Hexed. What made you choose them for this novella?

Thank you! I believe I chose them because they both grew up where history is very important in the United States—where belief, legend, and lore are important. They were ready to accept and understand other’s beliefs—and also look for a great deal more.

In this story, a banshee haunts the characters. You have written many other supernatural beings over the years. Do you have a favorite type you like to write?

No, no favorites! I just love the fact that every culture has its own version of ghosts and other supernatural creatures. Like different peoples, creatures also manifest in different ways. All of us who have lost someone want to believe that we’ll meet again—and a large portion of the world believes in a hereafter. And certain places so lend to possibilities—standing on the battlefield at Gettysburg at dusk, for example. You almost feel the history and emotion of that distant time—a very “haunting” feeling.

If you could cast the main characters for this story to be made into a movie, whom would you choose?

Hm. Maybe not someone well known. New talent! Except for Gary the Ghost. I’d cast Cary Elwes. I think he would be excellent—an exceptional talent and able to play good, bad, comedic—and dramatic.

We have been enjoying your work for many years, is there anything else you could ever picture yourself doing?

I majored in theater and we still put on a few shows at cons during the years and keep a “Slushpile” authors’ band. When I was young, I went the gamut. Ballerina, veterinarian, mermaid (lol—we had professional mermaids in Florida—still do, I think!) I love diving and I’d like to think I could have been a dive master, showing people unbelievable underwater treasures. Or, a dolphin trainer! I’m afraid of heights, so I wouldn’t be a pilot or rock climber. I really love animals, though, dolphins, especially, and spend a lot of time at Dolphin Research Center in Marathon where a friend is head of media. I’d love to work with the dolphins—they’re quite incredible. Let’s see—any kind of tour guide. I spent three days before last year’s NOLA RT convention taking people around the city. I had a wonderful time.

I, for one, always enjoy your supernatural tales because they have a sense of beauty rather than a sense of fright. Do you ever find it hard to write things that go bump in the night without being too scary?

I’m not sure—I’m not a fan of “slasher” movies. I remember joking with my daughter when I left her in California for college; I told her not to go parking with boys in the woods to drink or have sex—that’s where we all know a slasher will strike. She told me not to worry—she’d do her drinking and have sex in the dorm. But . . . well, it’s all kind of true. Cliché. I think about what scares me. I’m not afraid of giant alien bugs (watch an invasion make a fool of me!) or situations in which I just wouldn’t be caught. I am afraid of what we can’t really control and the things that sneak up on us when we’re unaware. I try to use that—and it depends on what I’m writing just how scared I want someone to be. Then, I do my best to reach that level.

Are there any locations that you’ve written about and haven’t visited but would like to?

I had a few chapters take place in Transylvania in a vampire book years ago—and I’ve never been, but would love to go. It’s a funny world, too. Transylvania to me has an incredible mystique—my daughter-in-law was twelve before she came to the U.S. from the Ukraine. To her, Transylvania was just where you went for vacation!

Are there any of your characters you would love to go back and write more of?

I have a number of characters I’d like to use again. And, thankfully—as in this novella!—I’m able to go back and make use of them.

I admire your work with our veterans and recently read about your involvement with Authors United for Veterans. Do you have any moments from that project you’d like to share with us?

There is no one to whom we owe more than our military, in my mind. No one who deserves more of our support. Nothing moved me more than a trip I took with International Thriller Writers with the USO. We visited the Middle East and spoke with commanders; but, most gripping were our trips to Walter Reed and other military hospitals. Everyone should have to visit and see the cost our men and women in uniform pay for our rights. We spent a lot of time arguing politics in this country—they buy us the privilege of arguing and speaking up. We owe them the best care possible; help for their children, a future when they return. There are many organizations out there—I like the Wounded Warrior Project, too. I’ve been at the dolphin facility for Wounded Warrior Day and it just amazes me more. At one swim, there was a wheelchair piled high with artificial limbs as the men and women went for their “swims.” When the swim was over, one fellow was trying to sort them all out. Another called out to him, “Hey! Give a Marine one task and he blows it!” The Marine laughed. “Hey—a Navy man would still be looking for the chair.” The way they go on and persevere is humbling. Sometimes, I learned, when you see a service man or woman, you can just walk up and say thank you—that little thing can brighten someone’s day.

Hint – Halloween! One of my favorite holidays—and no one does it up like we Americans! We’ll be heading back to the Big Easy for this one. Few places do Halloween quite so well as this mecca of faded grandeur and elegance, ghostly tombs, and dark alleys!