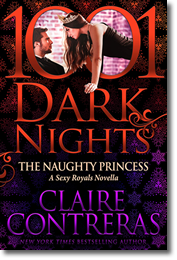 Princess Pilar is tired of playing by the rules. She’s sick of the spotlight and being seen as the uptight goody-too-shoes the media has cast her to be. She’s especially tired of the fact that her brothers are allowed to run off and do whatever they want while she sits inside watching the world pass her by. That’s why she decides that while her older brothers are off on their usual summer holidays, she’s going to quietly pack her things and travel to the one place her parents have always forbidden her to step foot on – Ibiza.

As the star of the French premiere fútball league, Benjamin Drake has it all – the money, the cars, the clothing contracts, and any woman he wants. Problem is, the only woman Ben has ever wanted badly enough to stop partying is Princess Pilar, the one he can never, ever have. Despite his fame and achievements, in Pilar’s world, she’ll always be royalty and he’ll always be a kid from the wrong side of the tracks who got lucky. He’d never be accepted. He knows that. Yet, when he spots Pilar partying at the same club as him, all bets are off. He’s determined to get her in his bed, even if it’s just for one night.

An Exclusive Interview With Claire Contreras:

First of all, YAY! I’m so glad you loved it. I’d been wanting to write a story about a soccer player and a princess for a long time. Originally, it was titled “The Princess and The Scoundrel” but that sounded way too historical, and even though I LOVE historical romance, I didn’t think the title would work in a contemporary world. When I wrote The Sinful King, King Elias’ siblings stood out to me and I thought, Pilar needs to be that princess. And Ben, well, Ben is just one of those guys who landed on the page and took over.

If you could be a royal for a day, what would you do?

I love this question. I honestly don’t know. I think the older I get, the more I see that beneath all the gold, the royals’ lives aren’t all that enviable, BUT I guess if I was a royal for one day I’d host a parade and ride around in a carriage.

What would we find on your desk right at this moment?

A lot of third grade text books! LOL My youngest son, Moses’, distance learning has taken over MY LIFE. And my desk.

If you could choose a theme song for this book, what would it be?

I’m working on Twisted Circles, the second book in my secret society series. It takes place in an Ivy League University and involves a plot that unravels slowly, as a girl finds herself trying to figure out who she is, why she’s there, and why she can’t remember anything that happened the last seventy-two hours.

Claire Contreras is a New York Times Best Selling Author who traded her psychology degree to write fiction. Don’t worry, she still uses her knowledge on every single one of her characters.

She’s a breast cancer survivor (x2), who was born in the Dominican Republic, raised in Florida, and currently resides in Charlotte, NC with her husband, two adorable boys, and French bulldog.

Her books range from romantic suspense to contemporary romance and are currently translated in over fifteen languages. When she’s not writing, she’s usually lost in a book.