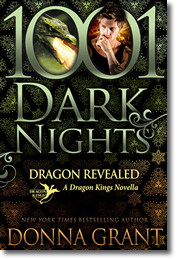 The capture of a Dragon King is cause for celebration. Jeyra never dreamed she would actually face one of the creatures who destroyed her home. But the longer she’s around him, the more she finds herself gravitating to him. All it takes is one reckless kiss that unleashes desires and the truth that has been hidden from her to set them both on a course that could be the end of them.

Varek, King of Lichens, has known nothing but a life with magic. Until he finds himself on a different realm unable to call up his powers. Worse, he’s in shackles with no memory of how it happened. When he sees an enthralling woman who leaves him speechless, he believes he can charm her to free him. The more she rebuffs him, the more he craves her, igniting a dangerous passion between them. Can he protect the woman he’s fallen for while uncovering the truth – or will peril that neither see coming tear them apart?

Oh, how I just LOVED this story and Jeyra and Varek! How did you choose them for this story?

Thank you! I knew Varek would be the Dragon King in this book first. Jeyra came along later when I really began seeing the first scenes of the book going through my head. Then, she was there in crystal clear format.

Speaking of loving things, Jeyra’s name is so fabulous and unique! How did you come up with it?

🙂 I found it on a fantasy name generator, but it’s actually a Spanish name. I thought it had a nice ring to it with a slight fantasy slant. I love finding names like this.

You recently celebrated the 11th anniversary of your Dark World…so awesome! Do you have any favorite or fun memory that stands out from the last 11 years?

Favorite? I think they’re all my favorites. Every book release, every reader email, every book signing. They were all amazing. But there are two that stood out above the others, and that was the release for TORCHED and INFERNO. Those two books were ones the readers let me know how much they wanted. And that isn’t something you see everyday.

What was one of the last spontaneous things you’ve done?

Lol. If you know me, you know I’m not spontaneous at all. It’s rare that I suddenly do anything out of the blue, but I’ve been trying to change that.

More dragons! DRAGON MINE, the second book in the Dragon Kings series that’ll be out July 12, 2021.