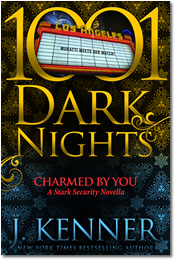 Former vigilante-for-hire Simon Barré has one steadfast rule: stay far away from celebrities. Too bad Simon’s first assignment at Stark Security is to protect A-list actress Francesca Muratti. He can’t even turn down the assignment, as that would be violating his second rule—never fail a woman. Now he finds himself up-close-and-personal with a high-maintenance diva whose flash and sass drives him crazy—but whose touch he undeniably craves.

The world might believe that Francesca Muratti leads a fairy tale life, but the truth is far darker. For years, she’s kept a horrible secret about her best friend’s death. Now someone is threatening to kill Francesca if she doesn’t reveal all. She needs protection, but there’s no way she’s going to tell the sexy Stark Security agent what she did or why she’s being threatened. Which means that in order to survive and protect her secrets, Francesca must pull off the biggest acting job of her career: she’s going to have to let Simon close, but not let him see her true heart.

**For fans of J. Kenner’s Stark Security series, Charmed By You is book nine in that series.**

An Exclusive Interview with J. Kenner

I’ve wanted to right Francesca’s story since she first showed up in the Nikki & Damien Stark books & novellas, and especially after she revealed that she actually had more heart than she showed in Wicked Dirty  (a Stark World novel).  But it wasn’t until Simon Barré introduced himself to me and demanded to be part of Stark Security that I finally realized who her perfect hero was!

SLEEP!!!  Seriously, I’m the kind of writer who blows straight through to the end once I reach a certain point. For most books, the home stretch is at least ten solid hours of writing, sometimes more. Naps are my friend!

I should probably go with a woman, but I’m gonna go with Scott Brick bc I think he is an amazing audiobook narrator, and I’ve been a fan for ages.

Two things: Don’t give up. And trust your voice.

My current WIP is for a semi-secret project in which I am massively rewriting a series I wrote many years ago. (Secret in that I’m not advertising it’s me because the genre is so different, but I’m not going to rabidly hide it, either.). So I’m not going to say the title of the book, but if anyone who reads paranormal romance and likes my writing style wants to know, just email me through my website to ask!

Sara took a long sip of whiskey for courage, then met Luke’s eyes. “You’ve been watching me.”

She sat back, surprised by his honesty, then lifted her drink. He reached out, capturing her arm before the glass met her lips. “What is this?” His thumb brushed lightly over the soft skin under her wrist, skimming over the characters inked there: 吸血鬼. [ Go back later. That he knows what it means.]

“Just a tattoo.” She waited for him to ask what it meant. When he didn’t, she asked, “Why? Watching me, I mean?”

“I already told you. You’re impressive.”

“You were watching me even before I got a conviction. I’ve seen you here four times during the trial, and I’ve felt your eyes on me each time.”

“Have you? I’m very glad to hear it.” He leaned forward and put his hand over hers. When he spoke again, his voice was low and smooth. “It’s the work that’s impressive, Sara. The passion. Not the conviction rate. You stand as champion for the weak. So do I. And,” he added with just the hint of a smile, “I’ve been in this bar watching you six times. Not four.”

“Oh.” She swallowed, suddenly aware of her pulse pounding in her veins. This felt bigger than the moment. More than the random act of meeting a guy in a bar. “Is that all you want?” The words came out as a whisper. “To watch?”

His brows rose, and she could tell he was fighting amusement. Her chest felt tight, and she had to work to breathe. She wasn’t certain how they’d slid into this sensual dance, but she was enjoying it immensely.

“No, Sara,” he said. “It’s not.” He leaned forward, his lips brushing her hair as whispered in her ear. “I want to celebrate with you.”

AAAAHHHHH … that is such a hard question for me. I don’t “see” faces (it’s a thing) so I don’t write with celebrities in mind. But if forced to, maybe Henry Cavill and Anne Hathaway

A zillion sips of water without taking a breath.

Octopus. At a restaurant with friends of my husband, they ordered it, swore it was delish. It wasn’t (In their defense, I’ve come to think it was badly prepared!)

As I noted above, I have face-blindness (yeah, it’s a thing with a fancy name: Prosopagnosia). I have to see someone A LOT to recognize them, and if they change their hair, all bets are off. So booksignings are really stressful bc I know I know folks … but I just don’t always recognize people (including other authors I’ve seen for years at conferences!). So, yeah, be patient with me!

I literally don’t remember. So here’s what I’m making up: (I can do that, because I’m a writer).  I was trying to think of a title of 2 or 3 words ending in You so that it would match the series. There’s initially friction between the characters, but ultimately (obviously!) they get over it. Frannie’s an actress, so she knows how to be charming … and even though she also has some, shall we say, bitchy tendency, in the end she totally charms the Hollywood-hating Simon!

Julie Kenner (aka J. Kenner and J.K. Beck) is the New York Times, USA Today, Publishers Weekly, and Wall Street Journal bestselling author of over forty novels, novellas and short stories in a variety of genres.

Praised by Publishers Weekly as an author with a “flair for dialogue and eccentric characterizations,” J.K. writes a range of stories including super sexy romances, paranormal romance, chick lit suspense and paranormal mommy lit. Her foray into the latter, Carpe Demon: Adventures of a Demon-Hunting Soccer Mom by Julie Kenner, is in development as a feature film with 1492 Pictures.

J.K. lives in Central Texas, with her husband, two daughters, and several cats.