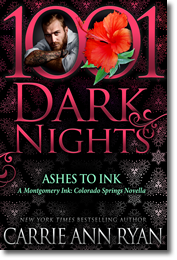 Back in Denver, Abby lost everything she ever loved, except for her daughter, the one memory she has left of the man she loved and lost. Now, she’s moved next to the Montgomerys in Colorado Springs, leaving her past behind to start her new life.

One step at a time.

Ryan is the newest tattoo artist at Montgomery Ink Too and knows the others are curious about his secrets. But he’s not ready to tell them. Not yet. That is…until he meets Abby.

Abby and Ryan thought they had their own paths, ones that had nothing to do with one another. Then…they took a chance.

One night at a time.

I. Loved. This. Story. So. Much. How did you choose Abby and Ryan for this novella?

Abby had been a side character in my Gallagher Brothers series who I had never planned to write. Her story began and ended with her love and loss in Hope Restored. I even named her the same name I had a character in a previous series. I had no plans to write her.

And then readers asked when she would get her story. When she could be whole enough to get her romance. And because of that, I found myself wondering if I could. As the Gallagher Brothers series was complete but set in the same Montgomery Ink world as my other series, I moved her down to Colorado Springs.

I wrote Ryan for her. I knew who she needed, and he was her counterpart. I even named him after my own name as an inside joke since Abby had the wrong name for a heroine as I don’t like to duplicate.

I know this particular story was hard for you to write. Were there any particular moments you had to take a break from writing and come back to?

Oddly enough, this wasn’t the easiest, but it wasn’t hard to write. Abby’s story begins after she’s greieved and already taken that step into who she could be post-losing Max. She also had a child and that moved her grief into a far different direction than my own.

But I wrote this book because I needed to figure out if I could. After losing my husband, I wasn’t sure I could write romance at all. So writing Ashes to Ink let me think that it’s okay for my characters to break and back. It was also a stepping stone into my current WIP, Shouldn’t Have You, which is about a recent widow and her journey into dating, life, and all the ups and downs that come from that. I think Abby’s strength is allowing me to write this story, and maybe one day write my own. (That is if Chris Evans ever asks me to marry him. The answer is yes, Captain. Just in case.)

Who would you dream cast to play Abby and Ryan?

If you had to have one of the members of the Montgomery clan tattoo you, who would you choose?

I already have their logo, the Montgomery Ink Iris on my back. But I’d love for one of them to mark me with the Tree of Life. It’s been a symbol for me during this book and throughout my own grief and I think they can do it justice.

Find the time of day that you write the best in. I know sometimes that doesn’t always work out for WHEN you have time, but if it does, it can be magic. I find my hardest part of writing is starting. Not just the book, but the day as well. So as long as I figure out those first ten minutes of sitting down (or standing up in my case as I pace while I write lol), I can get my word count in.

Also, it’s okay to not write every day. I might write more than the average amount of books a year, but I also don’t write weekends or nights. I have my time to get it done and I’ve learned to take time off as well. Our minds and souls need it.

So many things! I mentioned above I’m writing the Fractured Connections series. That will be coming out later this year and it’s turned out to be a FOUR book series, rather than a three book one! I hope to share about that elusive fourth book soon!

I’m also working on my YA series, Elements of Five in the afternoons. That started out as a passion projected and has turned into something I’m truly loving and am so scared for as well! Ashes to Ink will be my 69th book released and I feel like a debut author all over again with this series!

New York Times and USA Today Bestselling Author Carrie Ann Ryan never thought she’d be a writer. Not really. No, she loved math and science and even went on to graduate school in chemistry. Yes, she read as a kid and devoured teen fiction and Harry Potter, but it wasn’t until someone handed her a romance book in her late teens that she realized that there was something out there just for her. When another author suggested she use the voices in her head for good and not evil, The Redwood Pack and all her other stories were born.

Carrie Ann is a bestselling author of over twenty novels and novellas and has so much more on her mind (and on her spreadsheets *grins*) that she isn’t planning on giving up her dream anytime soon.