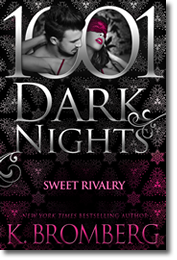 Ryder Rodgers had a plan.

He was going to stride into the conference room, do the required song and dance over the next five days, and win the biggest contract of his career. But when he walked in and heard the voice of one of his competitors, all his plans were shot to hell.

Harper Denton. She was always on top. In college. First in their class. Always using every advantage to edge him out to win the coveted positions. The only one who could beat him. His academic rival. More like a constant thorn in his side. And his ego’s.

When he heard her voice, he was brought back to years before. To the bitter taste of being second best. But the woman who meets his gaze is nothing like the drab wallflower he used to know. Hell no. She was all woman now: curves, confidence, and staggering sex appeal. And no doubt, still brilliant.

The fact that she’s gorgeous and bright won’t distract him. This time, Ryder’s determined to be the one on top. But not if Harper can help it.

An Exclusive Interview With K. Bromberg:

I loved this story so much! Ryder and Harper are simply amazing together. How did you choose them for this novella?

Thank you so much. I had recently just stepped outside of the Driven world (my original series) with my book, Sweet Cheeks, and had fallen in love with Ryder. I knew there was more to him and readers felt the same way, so I was pleased to get a chance to use the 1,001 Dark Nights series to be able to do that.

The rivalry between them was done so well. Not over the top and completely relatable to anyone whose ever had to compete for a job in the workplace. What kind of challenges did putting your characters in that position bring while writing?

I think to build any relationship in a novella is difficult because as the author, you need to create the emotions and the energy but in a fast forward speed . . . so for me I think the workplace atmosphere helped the motivation of the story. It helped with setting up that perfect amount of tension where you can see the other person, want them, but can’t touch them. I think the main challenge was to make it believable. To make sure there was enough of a history there that certain situations could arise and it could be believable.

You’ve given these characters two fantastic names. Where do you find your character name inspiration?

I’m very particular about my characters’ names to be honest. I don’t have a rhyme or reason to how I pick them, but I have a list of names that I’ve overheard that I like. For instance, in another novel I write, I overheard a mom at my daughter’s kindergarten class call her daughter’s name and I was like, ‘That’s the name!’ I also go by the theory that I want a reader to hear my characters’ names and be brought back to the book somehow. So for instance, I’d never name a character Christian… because I know when readers hear that name, they automatically think of FSOG.

Speaking of inspiration…Ryder’s appearance had me totally drooling. Is there anyone you used as a visual muse?

Can I say my imagination? It’s funny because I prefer the clean-cut look myself but I know a lot of my readers enjoy the tattoos and beard. . . so in a sense, I combined both of our wants and created Ryder. Plus, as fun as it is to write the bad boy, it’s also super fun to write the nice guy too.

What would we find on the top shelf of your refrigerator right now?

Can you give us a hint as to what you’re working on right now?

I’m currently working on a sports romance duet, The Player and The Catch. The Player is in its final stages of editing and will be out April 7th and I’m in the beginning stages of writing The Catch.

Thank you so much for your time to get to know a little more about me. I hope you all enjoy Ryder and Harper’s story in Sweet Rivalry.

New York Times bestselling author K. Bromberg writes contemporary novels that contain a mixture of sweet, emotional, a whole lot of sexy, and a little bit of real. She likes to write strong heroines, and damaged heroes who we love to hate and hate to love.

She’s a mixture of most of her female characters: sassy, intelligent, stubborn, reserved, outgoing, driven, emotional, strong, and wears her heart on her sleeve. All of which she displays daily with her husband and three children where they live in Southern California.

On a whim, K. Bromberg decided to try her hand at this writing thing. Since then she has written The Driven Series (Driven, Fueled, Crashed, Raced, Aced), the standalone Driven Novels (Slow Burn, Sweet Ache, Hard Beat, and Down Shift), and a novella (UnRaveled).