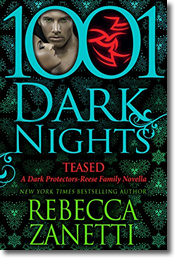 For almost a century, the Realm’s most deadly assassin, Chalton Reese, has left war and death in the past, turning instead to strategy, reason, and technology. His fingers, still stained with blood, now protect with a keyboard instead of a weapon. Until the vampire king sends him on one more mission; to hunt down a human female with the knowledge to destroy the Realm. A woman with eyes like emeralds, a brain to match his own, and a passion that might destroy them both—if the enemy on their heels doesn’t do so first.

Olivia Roberts has foregone relationships with wimpy metro-sexuals in favor of pursuing a good story, bound and determined to uncover the truth, any truth. When her instincts start humming about missing proprietary information, she has no idea her search for a story will lead her to a ripped, sexy, and dangerous male beyond any human man. Setting aside the unbelievable fact that he’s a vampire and she’s his prey, she discovers that trusting him is the only chance they have to survive the danger stalking them both.

I loved Teased! Chalton and Olivia were on fire together. How did you choose them for this novella?

I’ve been thinking about Chalton for a while, since he appeared in the very first Dark Protector book, and I figured it was time he got a story. Olivia seems to be his direct opposite, so they just made sense to me. He’s serious and fighting his past, and she’s a wild woman who embraces life on every level. They were tons of fun to write about.

For as much action and danger as there was, there was also a good amount of humor in Olivia’s comments. Is it ever hard to write the funny moments into a tense scene?

I think the funny moments are really my voice, because those come pretty naturally. All of a sudden, they appear in a scene, and they make sense to me.

I’ve gotta to give major kudos for Chalton loving Olivia’s not-model-type figure and I think a lot of readers will be able to relate to her as a character (I know I did!). What inspired you to write Olivia in that regard?

I don’t know a woman who doesn’t have body issues, so it seemed natural for Olivia to have a few. Plus, she’s a journalist, and writers spend a lot of time sitting and writing, so it’s easy to fill out a little. Most guys I know don’t like stick figures for women, and Chalton is a very secure badass, so I can see him liking a curve or two.

I love all of your paranormal worlds. What inspired you to first dive into writing that genre?

Awww-thanks! I like the ‘what if’ aspect of paranormal worlds, and that frees an author to really let loose. Plus, when you’re writing an alpha male, you can get away with a bit more in those darker worlds.

Oh my – you’d find way too much. I’ve been under a deadline, and my desk is a disaster. I have coffee cups, mail, vitamin D, a couple of water bottles, several sticky notes, lotion, the PIYO disks, my estimated tax form that I have to pay, and what appears to be a couple of cat toys.

Holiday time is right around the corner. Do you have any favorite gifts you love to give?

It’s always a challenge finding presents for my sisters. One just started a photography business, and I found her a coffee mug that looks exactly like a huge lens. It cracks me up whenever I look at it. I’m not sure what else to get her, though.

Speaking of gifts…what do you think Chalton would give Olivia for their first holiday together?

What a fun question! He’s a pretty old-fashioned guy, so I think he’d get her a very sparkly engagement ring, probably with diamonds and Alexandrite.

Right now I’m working on the next book in the Scorpius Syndrome series, which is a very sexy, very dark, dystopian romance series. The heroes are way Alpha, and the women are both gifted and brilliant. We’ll see where it goes. 😉

New York Times and USA Today Bestseller Rebecca Zanetti is the author of over twenty-five dark paranormals, romantic suspense, and contemporary romances. She lives in the wilds of the Pacific Northwest with her own Alpha hero, two kids, a couple of dogs, a crazy cat…and a huge extended family. She believes strongly in luck, karma, and working her butt off…and she thinks one of the best things about being an author, unlike the lawyer she used to be, is that she can let the crazy out. Her current series are: The Dark Protectors, The Maverick Montana Cowboys, and the Sin Brothers series. Upcoming series are: The Realm Enforcers and The Scorpius Syndrome.