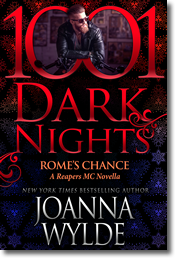 Rome McGuire knew he was in trouble the first time he saw her.

She was sweet and pretty and just about perfect in every way. She was also too young and innocent for the Reapers Motorcycle Club. He did the right thing, and walked away.

The second time, he couldn’t resist tasting her.

Gorgeous and smart, fun and full of wonder, she jumped on his bike and would’ve followed him anywhere. Still, she deserved a shot at happiness somewhere bigger and better than a town like Hallies Falls. Walking away wasn’t so easy that time, but her family needed her and he had a job to do.

When she came around a third time, he’d had enough. Randi Whittaker had been given two chances to escape, and now it was time for Rome to take his.

This time, the only way Randi would be leaving Hallies Falls was on the back of Rome’s bike.

An Exclusive Interview With Joanna Wylde:

I absolutely loved Randi and Rome! How did you choose them for this novella?

Rome’s Chance was kind of a fluke in many ways… Rome and Randi were a couple of my favorite side characters in an earlier book, Reaper’s Fire. When I originally plotted that story, I didn’t have romance in plan for either of them. But then I pictured a scene of them together and, and their chemistry (mostly in my head!) was just too good to pass up. (Fun trivia: Randi’s character was named after the real Randi in my readers group, the Joanna Wylde Junkies. Randi won the right to claim a character as part of a fundraiser for another member, who’d been diagnosed with cancer. I don’t even have words to describe the real world generosity and support the Junkies have shown each other through the years!)

In books, I have to say Sweet Dreams by Kristen Ashley. It was my first book of hers, and I still remember how much it blew me away. The heroine was in her early 40s, and she’d just gotten divorced. Now she has to completely rebuild her life and I loved watching this woman who had been through hell finding the reward she deserved.

Who would you dream cast as Rome and Randi?

I can’t answer this, I’m so sorry. I don’t really follow actors and actresses and I honestly have no idea what to say. You can make something up if you like, LOL. I tried to bullshit a replacement question below.

What real life place most inspired a setting in the book?

One of my favorite scenes in the book is set in an old barn in eastern Washington. I grew up in a small farming town, and as kids we played in old barns all the time. Every house in the country had one, usually from the original homestead. Climbing up into those haylofts was always an adventure. You never knew what kinds of treasure you’d find. I remember the lighting streaming through the cracks, and how little specks of dust danced in the beams as we play hide and seek. They were truly magical places. Of course, Rome and Randi have a slightly more adult experience of barns in this book…

If you can have a song play every time you entered a room, what would it be?

That’s tough! I think I’ll go with something sort of cliché, and say Journey’s Don’t Stop Believin’. That song has gotten a lot of exposure in recent years, but I never get tired of it. It has all the build up, story, and sense of hope for the future that I want in my own life, every day.

I’m working on two stories right now, both set in the Reapers world. I’m not announcing anything until they’re ready to go, but one is definitely a second chance at love. The other features a series favorite (Taz) that readers have been asking about for a while. Really looking forward to sharing them with everyone!

Joanna Wylde started her writing career in journalism, working in two daily newspapers as both a reporter and editor. Her career has included many different jobs, from managing a homeless shelter to running her own freelance writing business, where she took on projects ranging from fundraising to ghostwriting for academics. During 2012 she got her first Kindle reader as a gift and discovered the indie writing revolution taking place online. Not long afterward she started cutting back her client list to work on Reaper’s Property, her breakout book. It was published in January 2013, marking the beginning of a new career writing fiction.

Joanna lives in the mountains of northern Idaho with her family.