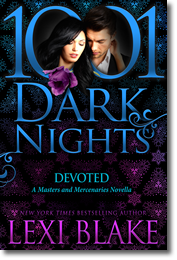 Amy Slaten has devoted her life to Slaten Industries. After ousting her corrupt father and taking over the CEO role, she thought she could relax and enjoy taking her company to the next level. But an old business rivalry rears its ugly head. The only thing that can possibly take her mind off business is the training class at Sanctum…and her training partner, the gorgeous and funny Flynn Adler. If she can just manage to best her mysterious business rival, life might be perfect.

Flynn Adler never thought he would fall for the enemy. Business is war, or so his father always claimed. He was raised to be ruthless when it came to the family company, and now he’s raising his brother to one day work with him. The first order of business? The hostile takeover of Slaten Industries. It’s a stressful job so when his brother offers him a spot in Sanctum’s training program, Flynn jumps at the chance.

A lifetime of devotion…

When Flynn realizes the woman he’s falling for is none other than the CEO of the firm he needs to take down, he has to make a choice. Does he take care of the woman he’s falling in love with or the business he’s worked a lifetime to build? And when Amy finally understands the man she’s come to trust is none other than the enemy, will she walk away from him or fight for the love she’s come to depend on?

I loved Devoted.  Amy and Flynn are off the charts hot! (I also loved seeing more of the people we saw in your last 1,001 Dark Nights novella!) How did you choose this couple for this story?

I introduced Amy in Cherished. She’s Bridget’s CEO sister who married her gay best friend in order to take over her nasty dad’s company and make things right. I liked her dedication to the people around her. Flynn showed up in Adored. He’s Mitch Bradford’s brother. Both want a closer connection with their families and both are the heads of their respective companies. So I thought why couldn’t they be rivals? Don’t rivals make fun lovers?

Your stories have some fabulous twists, turns, and drama in them.  Do you ever get stuck on how to tie things up by the end of a book?

Always! Every novel is a puzzle. You start with two people (or three or four) and figure out what all the obstacles they’re facing. Sometimes the solution is simple. Sometimes it takes a whole lot of thought. I tend to drive and listen to music that makes me think about the characters until the solution pops into my head.

If you could describe Amy and Flynn in five words, what would they be?

Way too many Post-It notes, a Fun Co Pop! figurine of Oliver Queen, my ever present calendar, pictures of my kids, a stuffed monkey my daughter gave me, my wedding ring because I can’t type with it on and an underused FitBit.

Dominance Never Dies. It’s the 11th main story line book in my Masters and Mercenaries series. It spawns a whole spin off series, too – Lawless.

Ok, so for 2016 I am going to be playing Mad Libs with the 1,001 Dark Nights authors for a bit of fun! Here is Lexi Blake’s Mad Libs titled “Prime-Time Gossip”: