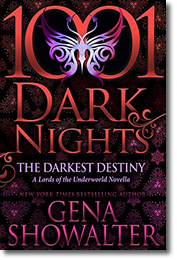 Forsaken. Deathless. A monster in every way. Mostly, Brochan is determined. He craves what fate promised him—the woman who will help him conquer a heavenly kingdom. He will stop at nothing to win her.

Viola, Keeper of the demon of Narcissism, lives for a single purpose—treating herself and her pet to the best life possible. But a crazed warrior is now appearing everywhere she ventures, ruining her fun…. tempting her beyond reason and keeping her at a razor-edge of desire.

Though legions of males have attempted to win her, all have failed. Somehow, this rampaging beast is tearing down her walls, one by one, claiming he owns her heart and her very destiny. To be with him, however, she must defeat the only force strong enough to destroy her—love.

Ahhh, how I LOVED Brochan and Viola’s story! How did you end up choosing them for this novella?

I had a story in mind for these two characters for quite a long time. Years, in fact. The narcissistic goddess and the beast who loves her. One year, I even did some plotting with Jill Monroe and Kresley Cole while in New Orleans.

If someone is new to you and your writing, they may not realize just how many genres you’ve written in (it’s pretty amazing!). Is it ever hard to switch gears?

I’ve liked switching gears. Over the years, I’ve changed, and my writing has changed with me. In fact, I recently started writing cozy mysteries with my best friend and fellow author Jill Monroe. (The Jane Ladling Mystery series, featuring the caretaker of a landlocked cemetery!) We are having the most amazing time blending romance with mystery. The transition was the easiest thing in the world. I don’t know if I’ve ever laughed so hard while crafting a story.

Are you able to write anywhere or do you have to be in a certain place?

I can write anywhere and often do lol I take a notebook everywhere I go. I’ve written in the lobby of a doctor’s office, a car (while in the passenger seat of course), the shower (I had to get in and out to jot things down), walking around while typing in my phone, and hiding in a corner at family parties.

You are a huge animal lover. Who are your current fur babies? *virtually pets them all*

We have the cats: The Honorable Judge Lulu and Inspector-Detective Cookie. Then the dogs: Thor aka His Highness the Great and Mighty Thorneus, Pepper aka Pep Pep/Peppy/Miss Potts, Boots aka Bootsie Bear/Mr. Wigglesworth, Noel aka Belle/Belle- Belle/Belly, Mr. Peanut aka Nutty Buddy/Nutters/Little Nut Sack, and Athena aka Our Little Porkchop. Four days ago, we trapped a feral kitten born on our property and named her Princess Buttercup. She’s about 4 months old and at first, hissed, clawed, growled and spit at us. She hid, terrified of everything. Now, she’s rolling to her back so we can pet her belly.

Can you give us a little snippet from your current work-in-progress?

This is from The Immortal:

Feeling petty, she reopened the underwear drawer, looked left, then right, then knocked over a stack. Ohhh. Hold up. What soft material. How decadent it felt against her skin.

“You cannot be only twenty-six years old!” Halo exclaimed from behind her. “You’re practically mortal.”

Oops. Caught with her hand in the pervert’s cookie jar. Cheeks burning, she withdrew and pivoted to face him.

He had materialized with a file in his big, masculine hands, and he was staring at her with something akin to horror. To her relief, he made no mention of her peeping as she closed the drawer with a bump of her hip.

“Your father is a nymph.” His extraordinary eyes pinned her. “A species known for playfulness and insatiably high sex drives. Rumors suggest a nymph’s climax causes days of euphoria for a lover.”

She smiled with saccharine sweetness. “It’s weeks of euphoria, thank you.” And from her experience, it was an absolute lie. “Your kind produces a pheromone known to lure unsuspecting prey into your clutches.”

Had his voice roughened at the end? Did he blame Ophelia for his attraction to her? And he was attracted to her. Her nymph side suddenly pinged with the knowledge.

“My clutches?” Voice dipping low, she said, “I assure you, I’m not luring anyone with a pheromone. You want me all on your own, big boy. And for the record, I’m one hundred percent, grade A harpy.” The same was true for all harpykind. Though, yes, they exhibited different abilities that were dependent on their father. “So? What else you got?”

“You currently have no known consort.”

“Again, so? Lots of harpies have no known consort.” The equivalent of a nymph’s entwine and the only calm to her storm. “For all you know, no one’s been good enough for me.”

“Every teacher, trainer, and superior has bemoaned your stubbornness.”

“I’m passionate about my belief that I’m right.” Needing to do something with her hands, she picked up a knickknack. A small crystal vase filled with rings. Ohhh. Diamonds. And sapphires. And rubies. And emeralds. And pearls. Mine, all mine!

No. Wrong. Harpies enjoyed pretty things, yes. And they enjoyed stealing pretty things even more. But they did not steal behind another harpy’s back. Only her front.

Ophelia set the vase aside, then lifted a trinket box brimming with teeth. A safer option to study. Except, she kind of wanted to swipe these even more. Back the trinket box went.

Halo continued to scan the pages of her file. Every so often, he tensed.

Did he really have to be so gorgeous? Look at him. All that thick, shiny dark hair probably felt like silk. And that huge, muscly body, with its broad, capable shoulders might feel in- credible on top of hers.

What are you doing? “So, um, what’s your father?” she asked. Fair was fair. If he opened a subject, she had a right to sail through its door.

“He was a god of war, and I killed him.” He offered the information easily, as if the detail carried no significance to him. He flipped his gaze to hers. “Designation—the Flunk Out. Nick- names—Phel, Fifi, Lady Orgasm, Lady O, Lady O No, Lady No O, Lady Go O, Lady No Go O, the Big O, the Big O No, the O Spot, the O No Spot, Hurricane O.”

So harpies liked to drag each other. So what? “You forgot Mistress O, Mistress No O, and Mistress O No.”

He continued reading. “You have zero kills.”

“Your mom has zero kills!” The nerve of this male, throwing her biggest flaws in her face this way. She had done nothing to him—but that could change on a dime. “If you want your mind blown, check out my maiming and pillaging stats. Yeah. That’s right. They’re off the charts.”

“Known to be volatile, with a hair-trigger temper. As proven by a hundred and eighteen write-ups for quote, unquote episodes, ninety-eight citations for uncontrollable rage, and two thousand and twelve recommendations for promotion.” Again, his gaze flipped up. “What constitutes an episode?”

“Your face! But, um, did you say two thousand and twelve?” No big deal, but a couple thousand harpies had pulled their recs for some reason. Whatever. Onward and upward. 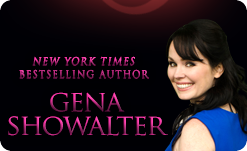