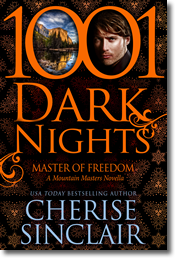 Detective Atticus Ware gave up Idaho to start again in the California mountains, close to his imprisoned brother. Although he’s found good friends, the experienced Dominant wants more than the “do me” submissives flocking around him. He needs a woman to give her heart as well as her body.

Finally, Atticus has found the woman he wants in his life. In his bed. In his cuffs. Only she keeps backing away. Well…if he has to help a little counselor get her head on straight, he’s just the Dom for the job.

An Exclusive Interview With Cherise Sinclair:

I can’t even begin to tell you how much I loved this story and Gin and Atticus. How did you choose them for this novella?

Thank you! That’s lovely to hear.

Okay, the idea for the novella—uh, is this the place I should admit that I got carried away and wrote a regular book? It ended up being twice the size of a novella. LOL

Anyway, the idea started with Atticus Ware. Detective Ware showed up in Edge of the Enforcer and was supposed to be a nice secondary character. An extra cop. No one special. But (typical Dom, right?), he made himself noticed the moment he stepped onto the page.

Much like a wolf when faced with another male, Ware rose to his feet. Six-one, muscular build, white shirt, badge on his belt, shoulder harness for his pistol. Dark brown hair reached his collar. Trim goatee. Hard blue eyes in a tanned face. “I don’t recall being introduced.”

The cop snorted. “You’re clear enough.” He did hold out his hand. “Atticus Ware. Detective.”

Atticus was the perfect excuse to go back and visit the crew in the Mountain Masters.

One of the elements I enjoyed tremendously was Gin’s job in the prison and what she went through day to day. Did you have to do any research to make sure it was authentic?

I have an awesome friend who is a prison social worker. To my surprise, she chose the job after working in safer settings. She simply loves the challenge…and the stories she tells would curl your hair. Her job was the perfect one for this book.

For research, she’s been incredibly generous and patient in answering my numerous questions.

“How does a body alarm work?”

“What do you mean they don’t restrain the prisoner when you have a session? Eeeks!” “ What do you wear every day?” (The recommended attire is “dowdy.” It was pitiful.)

I can only hope I managed to give Gin a fragment of my friend’s courage and compassion.

On a side note, I have an acquaintance—a Corrections Officer—who works for the California Department of Corrections and Rehabilitation. He was all excited about helping out with research…until I said I wanted help planning a prison escape. He never answered another email.

Sometimes, when the couple is having troubles, putting their feelings on the page is like ripping my guts out. The rest of the time—well, showing emotions is one of my favorite parts of writing, since I truly love the D/s dynamic. The communication, the trust, and that extra level of intimacy? There is nothing sweeter.

If you could cast Master of Freedom for a movie, who would play the main characters?

Well, I think I’d need a casting call for the part of Atticus, and, since I’d want him to be perfect, I would simply have to force myself to interview all those gorgeous actors. Thoroughly. The things we do for art…

But, that said, I have to admit that Anson Mount served as the starting person for Atticus. I saw his picture, loved his hat, and decided…okay…Atticus must be from Idaho. Has to have horses. Has that sexy cowboy saunter. 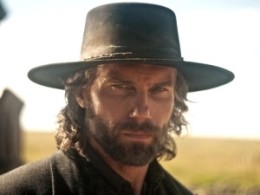 Tara Perry served as Gin’s beginning model. Can’t you see how awesome she’ll be when talking to prisoners? 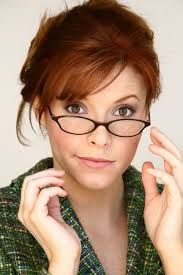 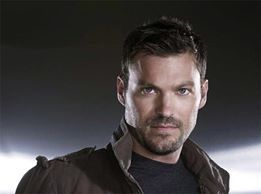 It’s Gin and Atticus’ first Valentine’s Day together. What gifts do they buy for one another?

Gin gives him new rope for bondage and suspension, prepared the way he likes, in colors that will look perfect against her new sexy negligee.

Atticus gives Gin her very own horse and, since he now has some rope to try out, he takes her out into the wilderness to have some fun. Stars, whispering pines, maybe a gag so she doesn’t scare the deer…

What would we find on your desk at this very moment?

The other has two oversized monitors, scattered notes about the next scene in Servicing the Target, computer glasses (because the reading ones just don’t hack it <g>), a giant cup of coffee, colorful pens from conventions, and a figurine from my sister that reminds me that each woman can and will overcome any obstacle in her path, 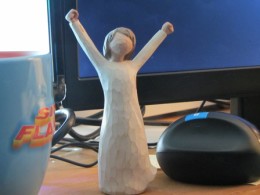 If you had a chance to interview any author, dead or alive, who would it be?

You know, I thought and thought about this, tried to come up with someone brilliant, and have to admit defeat. You see, like most writers, I’m an introvert. Seriously. A fall-off-the-end-of-the-scale introvert. Meeting someone who I idolize and having to…talk? Be coherent and not sputter or gulp? Uh, no.

This is why you are the interviewer. So I can stay safely in my cave and watch in awe.

I’m writing the next Masters of the Shadowlands novel—“Servicing the Target”—about Mistress Ann. I’d never planned to give the Mistress a story, but then a most unlikely man, Ben, decided he wanted the Domme.

As the author, I told Ben no. “Rethink this, Ben. Really bad idea.”

He didn’t listen. Disgruntled sigh. Their book will be out July 28th.

Jilly, thanks so much for letting me do a cave-chat and for the fun questions. I’m so excited about the release of Master of Freedom. I hope y’all will let me know what you think of Atticus and Gin’s story!

Having to wear glasses in elementary school can scar a person for life.

Dubbed a nerd at an early age, Cherise Sinclair has been trying to live up to the stereotype ever since. And what better way than being an author?

Cherise lives in the Pacific Northwest with her husband. Their two fledglings have left the nest recently to try their wings and hopefully will fly high and strong. The “ascendant erotica queen” (Rolling Stone Magazine) now spends her days writing with occasional supervision from a sadistic calico cat.