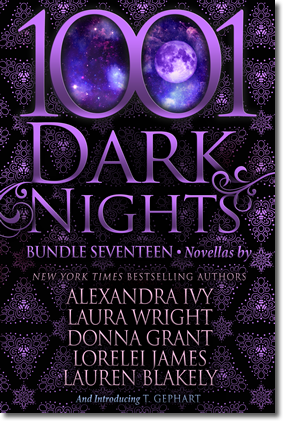 BLADE: A Bayou Heat Novella by Alexandra Ivy & Laura Wright
Blade was held captive by Benson Enterprises and abused for decades. When he’s finally rescued, he can’t return to the Wildlands. Not without the female he was forced to watch being impregnated. Valli just wants to run away and never look back. But with the shocking news of her pregnancy fresh in her mind, she wonders if that’s even possible. Told by her captors that one of the caged animals assaulted her, she knows she must do everything in her power to keep her unborn child safe.

DRAGON BURN: A Dark Kings Novella by Donna Grant
A promise made eons ago sends Sebastian to Italy on the hunt to find an enemy. His quarry proves difficult to locate, but there is someone who can point him in the right direction – a woman as frigid as the north. Using every seductive skill he’s acquired over his immortal life, his seduction begins. Until he discovers that the passion he stirs within her makes him burn for more… Gianna Santini has one love in her life – work. That is until a handsome Scot strolled into her life and literally swept her off her feet.

TRIPPED OUT: A Blacktop Cowboys® Novella by Lorelei James
Stirling Gradsky abandoned the corporate rat race for a more laidback lifestyle. So it’s ironic she’s stuck working with a hard-bodied, know-it-all scientist who treats her like a stoner instead of a stone cold business woman capable of running a large scale cannabis operation. Dr. Liam Argent’s doctorate isn’t in chemistry, but from the moment he meets his sexy new coworker, there’s enough heat between them to short out all the lights in the grow house. Sparks fly as their attraction blazes. But can they weed out their differences without getting burned?

STUD FINDER by Lauren Blakely
Man seeking woman: Hot, rich, smart, witty, self-made multimillionaire Internet genius seeks classy, intelligent, sexy, fun-loving woman who’s interested in settling down and sharing all the good things.
There. Best. Ad. Ever.
I will absolutely find the woman of my dreams, someone who’ll love me for me. Let me just hit the upload button right now…
* * * *
No. Just no. As a woman and a professional matchmaker, I can’t let Dylan Parker run this ad. He’s the catch of all catches. What woman in her right mind wouldn’t fall in love with Dylan?
I mean, besides me. It totally won’t be me.

#1 CRUSH by T. Gephart
Tia Monroe was smart, sassy and successful. Sure, she could get a little crazy at times, but that was part of her appeal. And while she didn’t see herself as ‘classically beautiful’, she had no shortage of options in the boyfriend department. She just hadn’t found one who held her interest. Until she laid eyes on Eric Larsson, and then it was lust at first sight. He packed the perfect mix of smoldering sexy and unapologetic cool into his blond-haired, blue-eyed, ridiculously hot six-foot-four frame. One smile from him was enough to twist her insides. But it wasn’t just his looks, he was smart and funny—charming in the most a-dork-able way. The only problem was…Tia had never actually met him.