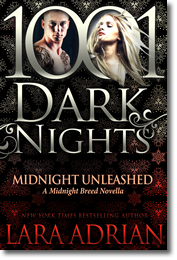 Return to New York Times and #1 international bestselling author Lara Adrian’s “addictively readable” (Chicago Tribune) Midnight Breed vampire romance series with a pulse-pounding novella of paranormal seduction and dangerous thrills, where an icy immortal beauty and a lethal Gen One Hunter must confront a powerful enemy while struggling to deny the irresistible calling of their blood.

An Exclusive Interview With Lara Adrian:

I loved Sia and Trygg! Talk about one heckuva ride! How did you choose them for this novella?

Thank you! Even before I reached the end of the previous Midnight Breed novel, DEFY THE DAWN, I knew that Tamisia’s fall from grace in the Atlantean colony was going to land her in Rome, where she would be the ideal mate for my surly, menacing former Hunter, Trygg. Of course, neither of them were on board with that idea, but they came around eventually. 🙂

If you could choose a dream couple to play them on the big screen, who would it be?

Oh, that’s tough! I could see Jason Mamoa (with a shaved head to play Trygg) and Margot Robbie (as a blonde).

Trygg was such a great wounded hero and I was swooning hard-core over him. Is it difficult to give heroes the dual hard and soft sides?

I’m so glad you liked him! I think I’m just wired as a writer to create heroes who are tough and impenetrable on the outside, but who are wounded on the inside. That dichotomy really speaks to me as a writer—and as a reader.

All of your book titles in the Midnight Breed series are so cohesive. How hard is it to keep that going while coming up with new titles?

It has been challenging at times, but I’ve got a running list of ideas and every time I run across a word that evokes something dark or passionate or intriguing, I jot it down as a potential title idea. I’ve also moved away from the “Midnight” titles on my series’ next generation to allow myself more options when it comes to fun titles.

If you could choose a color crayon to represent you, which one would it be?

Sunshine yellow. Even though I write darker stories, I am actually a happy optimist on the inside and in my everyday life. Only when I write, I bring out the “dark is my heart” black crayons! 😉

Could you tell us what you’ll be working on next?

I’m currently writing CLAIMED IN SHADOWS, which is the next full-length novel in the Midnight Breed series. Once I finish that book, I’ll be heading straight into my new Midnight Breed spinoff series, Hunter Legacy! The first book in that new series is called BORN OF DARKNESS. After that, I’ll be writing more Midnight Breed and Hunter Legacy novels in 2018 and also revisiting the characters in my 100 Series with a new contemporary romance. Lots of exciting things in the pipeline!