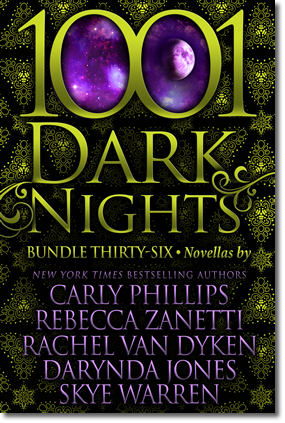 Dare to Tease by Carly Phillips
Brianne Prescott, publicist for Dare Nation Sports Agency, grew up the only girl with four brothers, three of whom are sports royalty. She’s a pro not just at work but at being used by men who want access to her famous family. She’s learned the hard way that everyone wants something from her, always. When Dr. Hudson Northfield rescues Bri from a homeless man outside the clinic where he works, he really notices her for the first time. Soon she’s accompanying him to New York for a family wedding, and despite her siblings’ overprotective protests, they’re falling in love.

Vampire by Rebecca Zanetti
Dr. Mariana Lopez has finally stopped bailing friends out of difficult situations. Well, except for substituting as the leader for another anger management group, pitching in as a campaign strategist for a prospective sheriff, and babysitting three dogs. Even with such a full life, she can feel the danger around her—a sense that something isn’t right. Nightmares harass her, until the real thing comes to life, and only the dark and sexy male sitting in her group can save her.

Mafia King by Rachel Van Dyken
One of the first rules they give you when you’re undercover—never fall for the enemy.
I didn’t just fall for the enemy.
I became what I was supposed to hate.
What’s worse: I fell in love with one.
I live a double life, and both sides know it’s only a matter of time before I’m forced to choose.
Rebirth through mafia blood.
Or death at the hands of the very government I swore to protect.

The Gravedigger’s Son by Darynda Jones
The job should have been easy. Get in. Assess the situation. Get out. But for veteran tracker Quentin Rutherford, things get sticky when the girl he’s loved since puberty shows up, conducting her own investigation into the strange occurrences of the small, New Mexico town. He knew it would be a risk coming back to the area, but he had no idea Amber Kowalski had become a bona fide PI, investigating things that go bump in the night. He shouldn’t be surprised, however. She can see through the dead as clearly as he can. The real question is, can she see through him?

Finale by Skye Warren
Francisco Castille, the exiled Duke of Linares, knows his duty. Even in modern times, the line must continue. So he’ll marry and produce an heir. Yes, a wife will fit into his well-ordered life. Instead he ends up with the brilliant pianist Isabella. Strong. Spirited. And highly disobedient. She rebels against every custom and every rule, threatening his careful balance. Francisco never backs away from a challenge. Isabella never bows down to anyone.