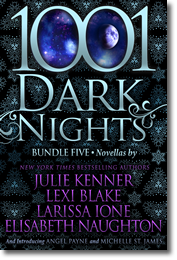 CARESS OF PLEASURE: I’d thought that he was mine, the dark, arresting man who commanded not only my body but my heart. Dante had swept into my life, and I’d succumbed to the burn of passion in his arms. I’d believed we had a love that would last forever, but he’d shattered my dreams and broken me into pieces when he’d walked away.

ADORED: Mitch Bradford knows he’s not good for any woman—especially not his best friend’s sister. Laurel Daley knows what she wants, and her sights are set on Mitch. She knows he just needs a little polish to make some woman the perfect lover. She intends to be that woman, but first she has to show him how good it could be.

HADES: Cataclysm was kicked out of Heaven and is now a fallen angel. All she wants is to redeem herself and get back where she belongs. When she gets trapped in Hades’s Underworld prison domain with only Hades to help her, Cat finds that where she belongs might be in the place she least expected…

RAVAGED: Ari has one singular focus: revenge. His guardian brothers all think he’s dead, but he is alive and chipping away at Zeus’s Sirens every chance he can. When he abducts the wrong female and his identity is finally exposed, it will take the courage of one woman willing to stand up to a warrior who’s become a savage to rein Ari in.

NAUGHTY LITTLE GIFT: From the moment Mishella Santelle locks eyes with Cassian Court, she can see the man beneath the power…the bruised soul for whom hers has been destined. When six months of her life are bargained to Cassian in a multimillion dollar contract, Mishella is helpless against the reaction of her body and soul to this man.

THE SENTINEL: Determined to maintain the friendship that has been her rock since childhood, Diana Barrett resigns herself to keeping her distance from Leo Gage. Leo has worshipped Diana Barrett since they were kids, but she can never know that. When Diana witnesses a murder, she goes to the only person who has ever made her feel safe. Now Leo and Diana are on the run.