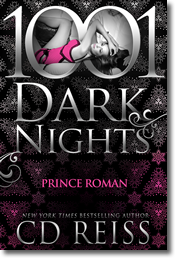 I’m playing it cool, clean, and professional…until I meet Roman Bianchi. He’s not an insecure nerd or an ego-hole like the other kings of Silicon Valley. He’s charming and handsome. He’s fun, funny, and smart.

He’s also in the office across the hall.

Two broken rules waiting to happen.
I can’t lose this job over some guy.
But Roman’s not just some guy. Under that suit and cocky smile, he’s a prince.

An Exclusive Interview With C.D. Reiss:

Man oh man, I loved Roman and Raven! They are beyond freaking smoking hot together. How did you choose them for this novella?

Raven was already in my lexicon. She and Taylor, the main character in King of Code were having a mutually fulfilling, casual relationship. I didn’t have space in the book to explore her, but I loved her maturity and curiosity. I knew right away she needed her very own HEA.

The perfect guy for her was someone like Taylor, but without the snarky arrogance. She needed someone full of life who loved to play, and who also had an air of professionalism she finds sexy.

Raven is a woman who knows what she wants and goes after it, unabashedly. I loved her for that. Is it hard to strike a balance between a forward female character who doesn’t come off as unlikable?

To be frank, if a woman who is smart and unapologetically ambitious is unlikeable to a reader, they won’t like any of my books. Almost all of my heroines are determined, loyal, and motivated. Sometimes the guy gets in the way. Sometimes he helps her get what she wants. But she always has to find a place for a man inside a life that’s already complete.

If you could cast Roman and Raven for a movie, who would you choose?

Roman would be Christian Bale. He looks so serious but when he smiles, the frame just lights up and you can tell he’s a guy who likes to have fun. He also looks stunning in a suit.

Raven would be Natalie Portman. She can play so tough and businesslike, but when she melts, she melts hard.

What would your autobiography be called?

Diary of a Late Bloomer

Everything in life that I’ve gotten, I’ve gotten late. It’s my lot in life. I figure that means I’ll get grey hair and achy bones later as well. At 50, I’m still only about 20% silver which is pretty darn good.

I’m working on Prince Charming, which is about a sexy British hacker we met in King of Code, and an FBI agent. It’s a standalone that will release in February.

I’m also really excited about Bodyguard, which is coming out on November 14th (so soon!). The ARCs are getting really great word of mouth. Two readers have told me they were in absolute tears at one point and, well I’m sorry but making people cry is the best thing ever.

C.D. Reiss is a USA Today bestseller. She still has to chop wood and carry water, which was buried in the fine print. Her lawyer is working it out with God but in the meantime, if you call and she doesn’t pick up, she’s at the well, hauling buckets.

Born in New York City, she moved to Hollywood, California to get her master’s degree in screenwriting from USC. In case you want to know, that went nowhere, but it did give her a big enough ego to write novels.

Critics have dubbed the books “poetic,” “literary,” and “hauntingly atmospheric,” which is flattering enough for her to put it in a bio, but embarrassing enough for her not to tell her husband, or he might think she’s some sort of braggart who’s too good to chop a cord of wood.

If you meet her in person, you should call her Christine.