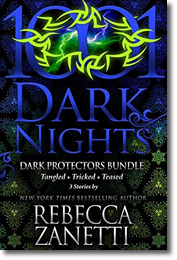 For almost a century, the Realm’s most deadly assassin, Chalton Reese, has left war and death in the past, turning instead to strategy, reason, and technology. His fingers, still stained with blood, now protect with a keyboard instead of a weapon. Until the vampire king sends him on one more mission; to hunt down a human female with the knowledge to destroy the Realm. A woman with eyes like emeralds, a brain to match his own, and a passion that might destroy them both—if the enemy on their heels doesn’t do so first.

Olivia Roberts has foregone relationships with wimpy metro-sexuals in favor of pursuing a good story, bound and determined to uncover the truth, any truth. When her instincts start humming about missing proprietary information, she has no idea her search for a story will lead her to a ripped, sexy, and dangerous male beyond any human man. Setting aside the unbelievable fact that he’s a vampire and she’s his prey, she discovers that trusting him is the only chance they have to survive the danger stalking them both.

Former police psychologist Ronni Alexander had it all before a poison attacked her heart and gave her a death sentence. Now, on her last leg, she has an opportunity to live if she mates a vampire. A real vampire. One night of sex and a good bite, and she’d live forever with no more weaknesses. Well, except for the vampire whose dominance is over the top, and who has no clue how to deal with a modern woman who can take care of herself.

Jared Reese, who has no intention of ever mating for anything other than convenience, agrees to help out his new sister in law by saving her friend’s life with a quick tussle in bed. The plan seems so simple. They’d mate, and he move on with his life and take risks as a modern pirate should. Except after one night with Ronni, one moment of her sighing his name, and he wants more than a mating of convenience. Now all he has to do is convince Ronni she wants the same thing. Good thing he’s up for a good battle.

Ginny O’Toole has spent a lifetime repaying her family’s debt, and she’s finally at the end of her servitude with one last job. Of course, it couldn’t be easy. After stealing the computer files that will free her once and for all, she finds herself on the run from a pissed off vampire who has never fallen for her helpless act. A deadly predator too sexy for his own good. If he doesn’t knock it off, he’s going to see just how powerful she can really be.

Theo Reese had been more than irritated at the beautiful yet helpless witch he’d known a century ago, thinking she was just useless fluff who enjoyed messing with men’s heads. The second he discovers she’s a ruthless thief determined to bring down his family, his blood burns and his interest peaks, sending his true nature into hunting mode. When he finds her, and he will, she’ll understand the real meaning of helpless.