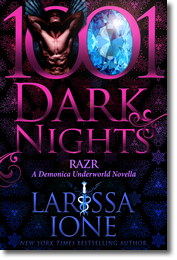 A fallen angel with a secret.

An otherworldly elf with an insatiable hunger she doesn’t understand.

Meet mortal enemies Razr and Jedda…and the priceless diamond that threatens to destroy them both even as it bonds them together with sizzling passion.

Welcome back to the Demonica Underworld, where enemies find love…if they’re strong enough to survive

Oh, how I loved Razr and Jedda! How did you choose them for this novella?

I’m so glad you loved them! I chose them because…well, they are ushering some fresh new elements into the Demonicaverse that will set the stage for future books. Razr’s situation is unique and remains unique even as the story ends (all part of Heaven’s concern for the future Final Battle, and Jedda, as an elf, leads us to a brand new realm with a million possibilities!

Jedda is a fantastic character with an interesting ability dealing with gems. How did you come up with the idea for that?

I often tell people that I learned to read from horror novels (which explains a lot of my writing!) but I also have a deep love for science fiction and fantasy. The day I discovered Terry Brooks, J. R. R. Tolkien, and Robert Jordan was a game changer for me. Fantasy is full of treasure and shiny things, and I wanted to bring some of that to my Demonica world, which is often extremely dark and grim. What better way to do that than bringing in an elf who literally lives and dies for gemstones?

I get names from everywhere. Sometimes I just see or hear a word and think, “Hey, that would make a great name!” With Razr, I found his in a book about angels. His angelic name is Razriel, so Razr is just a short version that works perfectly for a fallen angel. I got Jedda as a shortened version of Jeddadiah, which I had seen a few years ago in some movie’s credits. (I always watch credits for name ideas!)

With so many characters and layers to your world, I have to ask how you keep it all straight. Do you have a story bible or do you just keep it all in your head?

Both, but keeping it in my head is becoming harder and harder, so I’m actually slowly going through all my books and adding more detail to the existing bible, since I didn’t keep up with it.

If you could pick one song to be your theme song, what would it be?

That has always been a tough question. My go-to is “It’s Five O’Clock Somewhere,” by Alan Jackson, and I’ve always been surrounded by music boxes and stuff that play “Lara’s Theme,” (From Doctor Zhivago, where my name came from…my family nickname is also Lara,) but you know what song always gives me a big lift when I need it? The theme song from Star Trek: Enterprise. Yes, really. Just give it a listen. It was totally my theme song when I was trying to get published:

Can you tell us what’s next for you and your writing?

I have SO much coming up! I’ve taken a little time off over the last couple of years, but this year is going to be a banner year for my writing. Readers will see the results next year, and I want to thank them for their patience. I’ll have at least five releases next year, including the first books of a new series. More information coming soon! 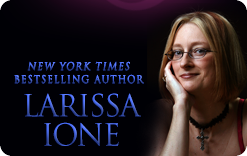