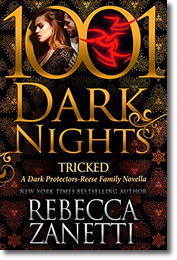 Former police psychologist Ronni Alexander had it all before a poison attacked her heart and gave her a death sentence. Now, on her last leg, she has an opportunity to live if she mates a vampire. A real vampire. One night of sex and a good bite, and she’d live forever with no more weaknesses. Well, except for the vampire whose dominance is over the top, and who has no clue how to deal with a modern woman who can take care of herself.

Jared Reese, who has no intention of ever mating for anything other than convenience, agrees to help out his new sister-in-law by saving her friend’s life with a quick tussle in bed. The plan seems so simple. They’d mate, and he move on with his life and take risks as a modern pirate should. Except after one night with Ronni, one moment of her sighing his name, and he wants more than a mating of convenience. Now all he has to do is convince Ronni she wants the same thing. Good thing he’s up for a good battle.

I adored Ronni and Jared’s story soooo much! How did you choose them for this novella?

Thank you! Both Ronni and Jared appeared in Teased, and they seemed like a wild match from the start. He never plans on settling down, and she only needs to mate to survive, so it appeared it was a good arrangement with no emotional entanglements. Yet things get emotional and suddenly, there’s a bunch of tension and an intriguing romance. The novella unfolded from there.

There was one adorable and awkward sexy scene in this book and I loved it! Is that the first scene like that you’ve written? Did you laugh when you wrote it?

I can honestly say that the scene you’re talking about is the first time, ever, that I’ve written an awkward mating scene involving vampires. (Or anybody else, for that matter). I alternated between laughing and cringing a little as I wrote it. I mean, you want to laugh because it’s funny, but it’s awkward enough that you want to hide your eyes a bit, too.

You write in a couple of different genres. Is it ever difficult to switch gears?

Yeah, I think it gets a little tough sometimes. It’s great to switch back and forth, because things stay fresh and I don’t get bored (so hopefully the reader doesn’t, either). But every once in a while I get so lost in one of the books, it’s difficult to leave and enter another world. Having completely different song playlists for each book/series helps a lot, though.

A huge mess. LOL. I just finished page proofs on JUSTICE ASCENDING, which is the Scorpius Syndrome book 3. And I’m in the middle of conceptual edits for LETHAL LIES, which is the second book in the Blood Brothers series. So there are sticky notes, pens, lotion, tea and coffee cups, and tons of paper everywhere. There’s also a dragon figurine.

Ok, so for 2016 I am going to be playing Mad Libs with the 1,001 Dark Nights authors for a bit of fun! Here is Rebecca’s Mad Libs titled “Medical Drama”:

DOCTOR: We can’t let him! Look at the way his knee is shaking,

NURSE: Uh-oh, he’s putting a mask over his Popsicle! Doctor, stop him before he farts somebody.

DOCTOR: Smith, you can’t operate on this clown! I forbid it.

SMITH: How dare you say that to me? I’m your mentor. You’re like a whip to me.

DOCTOR: And you’re like a nipple clamp to me, but I can’t risk the wrath of a pudding to satisfy your ego. Look in the mirror. Would you trust that duck to remove a crazy nail?

New York Times and USA Today Bestseller Rebecca Zanetti is the author of over twenty-five dark paranormals, romantic suspense, and contemporary romances. She lives in the wilds of the Pacific Northwest with her own Alpha hero, two kids, a couple of dogs, a crazy cat…and a huge extended family. She believes strongly in luck, karma, and working her butt off…and she thinks one of the best things about being an author, unlike the lawyer she used to be, is that she can let the crazy out. Her current series are: The Dark Protectors, The Maverick Montana Cowboys, and the Sin Brothers series. Upcoming series are: The Realm Enforcers and The Scorpius Syndrome.