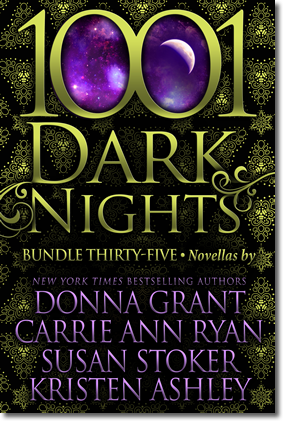 Dragon Revealed by Donna Grant
Jeyra never dreamed she would actually face one of the creatures who destroyed her home. But the longer she’s around him, the more she finds herself gravitating to him. All it takes is one reckless kiss that unleashes desires and the truth that has been hidden from her to set them both on a course that could be the end of them.

Captured in Ink by Carrie Ann Ryan
Julia and Ronin know their relationship is solid. They’ve been through hell and back, but their love has stayed true through it all. When Ronin’s ex, Kincaid, comes back to town, however, the two realize what they might be missing.

Securing Jane by Susan Stoker
Storm North has witnessed two teams of Navy SEALs under his command find true love. He doesn’t expect the same for himself. He’s too old. Too jaded. Too set in his ways. Until a woman who’s been right in front of him for years manages to impress Storm in a way very few women—or men—ever have.

Wild Wind by Kristen Ashley
When he was sixteen years old, Jagger Black laid eyes on the girl who was his. At a cemetery. During her mother’s funeral. For years, their lives cross, they feel the pull of their connection, but then they go their separate ways. But when Jagger sees that girl chasing someone down the street, he doesn’t think twice before he wades right in. And when he gets a full-on dose of the woman she’s become, he knows he finally has to decide if he’s all in or if it’s time to cut her loose.