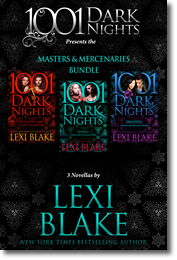 Karina Mills has a reputation for being reckless, and her clients appreciate her results. As a private investigator, she pursues her cases with nothing holding her back. In her personal life, Karina yearns for something different. Playing at Sanctum has been a safe way to find peace, but the one Dom who could truly master her heart is out of reach.

On the hunt for a killer, Derek enters a shadowy underworld only to find the woman he aches for is working the same case. Karina is searching for a missing girl and won’t stop until she finds her. To get close to their prime suspect, they need to pose as a couple. But as their operation goes under the covers, unlikely partners become passionate lovers while the killer prepares to strike.

Laurel Daley knows what she wants, and her sights are set on Mitch. He’s smart and sexy, and it doesn’t matter that he’s a few years older and has a couple of bitter ex-wives. Watching him in action at work and at play, she knows he just needs a little polish to make some woman the perfect lover. She intends to be that woman, but first she has to show him how good it could be.

When an unexpected turn of events throws the two together, Mitch and Laurel are confronted with the perfect opportunity to explore their mutual desire. Night after night of being close breaks down Mitch’s defenses. The more he sees of Laurel, the more he knows he wants her. Unfortunately, someone else has their eyes on Laurel and they have murder in mind.

Amy Slaten has devoted her life to Slaten Industries. After ousting her corrupt father and taking over the CEO role, she thought she could relax and enjoy taking her company to the next level. But an old business rivalry rears its ugly head. The only thing that can possibly take her mind off business is the training class at Sanctum…and her training partner, the gorgeous and funny Flynn Adler. If she can just manage to best her mysterious business rival, life might be perfect.

Flynn Adler never thought he would fall for the enemy. Business is war, or so his father always claimed. He was raised to be ruthless when it came to the family company, and now he’s raising his brother to one day work with him. The first order of business? The hostile takeover of Slaten Industries. It’s a stressful job so when his brother offers him a spot in Sanctum’s training program, Flynn jumps at the chance.

When Flynn realizes the woman he’s falling for is none other than the CEO of the firm he needs to take down, he has to make a choice. Does he take care of the woman he’s falling in love with or the business he’s worked a lifetime to build? And when Amy finally understands the man she’s come to trust is none other than the enemy, will she walk away from him or fight for the love she’s come to depend on?