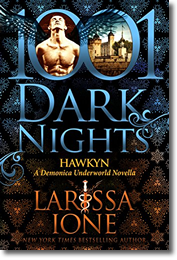 As a special class of earthbound guardian angel called Memitim, Hawkyn is charged with protecting those whose lives are woven into the fabric of the future. His success is legendary, so when he’s given a serial killer to watch over, he sees no reason for that to change. But Hawkyn’s own future is jeopardized after he breaks the rules and rescues a beautiful woman from the killer’s clutches, setting off an explosive, demonic game of cat and mouse that pits brother against brother and that won’t end until someone dies.

Aurora Mercer is the half-wytch lone survivor of a psychopath who gets off on the sadistic torture of his victims. A psychopath whose obsessive psyche won’t let him move on until he kills her. Now she’s marked for death, her fate tied to that of a murderer…and to a sexy angel who makes her blood burn with desire…

OMG I love this novella so much I can’t even stand it. How did you choose Hawkyn and Aurora for this story?

Thank you, Jillian! I’ve loved Hawkyn since he was first introduced in RAZR – plus, I love his name, which I borrowed from one of my son’s friends. And I’d been wanting to explore the conflict a guardian angel might experience when they have to protect a scumbag, similar to what medical or rescue personnel might go through when they have to save the life of a murderer or a rapist or a drunk driver. As far as Aurora, well, I needed a heroine who would make Hawkyn feel the conflict like never before. She forced him to set aside his ability to compartmentalize in order to experience empathy for an individual rather than for humanity as a whole. I think that now, given our tribal politics, understanding the individual’s experience is getting lost in what people think is best for their population in general. And while “the needs of the many outweigh the needs of the few – or the one,” we can’t forget that the “one” is still a person with feelings and importance, and they matter too. It’s a lesson Hawkyn needs to learn.

If you could dream cast Hawkyn and Aurora, who would you choose?

Honestly, I don’t know. I’m terrible with casting my own movies. But you know who might make a good Hawkyn, now that I think about it? Stephen Amell. Although I’d be happy with him playing any character!

Your world building is simply phenomenal. How do you keep track of all the details?

I keep notes. Lots and lots of notes! And I’ve learned not to get TOO detailed unless the detail is necessary to the plot. The “devil” is definitely in the details!

You’ve had so may interesting careers over the years. If you weren’t writing, what do you think you’d be doing as a job?

I’d either go back to meteorology, which I loved (but I don’t live near a weather station anymore,) or I’d train dogs professionally again. I love animals, so working with them is always a joy. Ooh, or I’d love to be a movie critic. OMG, a job that would require me to watch movies? I’m SO there.

If you had to choose a song to play every time you walked into a room, what would it be?

I’ve been loving on this one for a couple of years now: Everything is Awesome! (From The LEGO Movie. *g*)

Gladly! I’m just putting the finishing touches on the next book in the Demonica Underworld series, which also happens to be a crossover into Lexi Blake’s Masters and Mercenaries world. I’m super excited about it because not only do I adore Lexi Blake and crossovers, but this book is just special in a lot of ways. After that, I’m diving into the new Demonica series where all of the kids are all grown up! 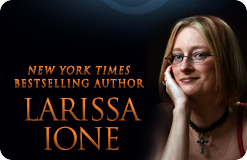