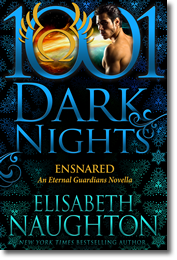 For thousands of years, Ryder has reveled in his role as an immortal messenger—a dream weaver sent to seduce and manipulate. Until he’s ordered to deceive a fantasy of his own.

Zakara, the daughter of one of the mightiest Eternal Guardians, is his perfect woman. But she’s impervious to Ryder’s advances. Each attempt to sway her to his will pushes him deeper into a dreamscape she seems to be controlling. To survive, Ryder will need to find a way to master his sexy new prey. Because if he can’t, he risks forever condemning himself and the woman he’s grown to love to a never-ending nightmare drawn straight from the twisted depths of hell.

An Exclusive Interview With Elisabeth Naughton:

Oh how I adored this story! How did you choose Ryder and Kara for this novella?

I’m so happy you enjoyed the latest Eternal Guardians story! Thank you! And thanks for inviting me to stop by.

Whenever Liz Berry asks for a novella in the Eternal Guardians world, I always have to stop and think long and hard about who to write about. Not because I don’t have plenty of characters to choose from, but because the stories percolating for many of these characters can get pretty long. I really want these books to be an intro into the Eternal Guardians world for new readers, and that means not getting bogged down in too much that has already happened with other characters and plotlines. Anyone who has read the other books (the long books) knows I can easily get sucked into writing multiple storylines and numerous points of view (it’s so fun!) but I can’t do that in these, which means being really careful about who I write about in a novella vs a full-length book.

This story was easy to choose characters for, though. Kara (the heroine) has been mentioned in other books, but not seen much. I knew I wanted to write a story for her, but I also knew that her story wasn’t going to be linked to the overarching plotline happening in the full-length books. I also knew I wanted to write something about Morpheus—the god of dreams from Greek mythology. Dream weavers themselves are pretty well-known in modern culture (hello, Dream Weaver song from the 1970s!) so I decided this would be a perfect story to introduce my cosmic deity, Ryder (AKA Morpheus) to my readers.

I adore your Eternal Guardians series and your take on mythology. Who has been the easiest character to write?

I love hearing that! All these characters are very near and dear to my heart, so I love knowing that readers have fallen for them as well.

The easiest characters for me to write are always the snarky characters in the books. Probably because I tend to have a snarky personality myself. The Guardian books can be a little dark at times, a little intense, a little emotional, so whenever I have a snarky character like Orpheus who can pop onto the page and lighten things up, those scenes just fly off my fingers. WRITING Orpheus’s book (ENRAPTURED) was harder than I expected because I had to get to the bottom of who he was and why he was such a schemer (and a character can’t always be snarky) but it’s really helped me understand him. Now, whenever he appears in a scene, it’s usually unplanned (as it was in ENSNARED) and I have to be careful not to let him take over the entire objective of the scene. (Which is really what he wants.) He is forever a trouble-maker, but I love him, and I think he, and characters like him, really add depth and fun to the series.

…and who has been the most challenging?

Oh boy. Most challenging. At the moment, that is Zagreus. But I won’t go into that because that’s later…

The two most challenging heroes for me were two fan favorites. Demetrius was the first. He was just so DARK, it was hard for me to understand him. It still is sometimes. But readers absolutely love him. I repeatedly hear from readers that TEMPTED is their absolute favorite book in the series, and it always makes me chuckle because Demetrius was a complete jerk through most of that book (of course, with reason! LOL) His transformation was so dramatic, though, I think that’s what readers love most about his story. And he’s a severely wounded hero, which is something else readers in this genre seem to adore.

The other really challenging character for me was Gryphon. Oh man, Gryphon’s story (ENSLAVED) was just soooo heartbreaking to write. Not only because of what he went through, but because I, as a woman, really had to stretch my writing, researching, and understanding skills to even comprehend how a man would deal with any of that. (And I know I’m being vague for those of you who haven’t read ENSLAVED, but I’m doing so intentionally because I don’t want to give anything away.) Gryphon was the most wounded hero I’ve ever written, and in some ways it was traumatic for me. Especially because he’ll never be the same after what he went through. But that book is one of my absolute favorites from the series simply because the message of survival and never losing hope is so strong.

When you began writing, did you plan to write in different genres?

No. Definitely not. When I first started writing, I thought I’d write in the romantic suspense genre forever and become the next Elizabeth Lowell! (I used to love her books, and I’m still sad she never finished the Donovan series!) I actually stumbled into writing the Eternal Guardians series by mistake. My first published book – STOLEN FURY – was a treasure hunt romantic suspense. The treasure in that book was made up of three separate reliefs of the three furies from Greek mythology. I ended up doing so much research on the furies for that book that I said to one of my writing friends one day, “I could write a paranormal series with all this.” Her response? “So do it.” And not being one who can ever say no, I did. MARKED (book 1 in the Eternal Guardians series) was the result. It sold within two weeks, and the series took off. No one was more shocked than me.

If Hollywood made a movie about your life, who would you want to star as you?

Oh, good gods. My life is way too boring for Hollywood. I have no idea. But if I get to choose, she’s going to be nothing like me. She’s going to be SUPER organized, always on time, totally SWEET, tall, loves to wear trendy heels, has AMAZING long, thick hair, and looks great in every outfit straight off the rack.

A girl can dream, right?

How do you think Ryder and Kara would celebrate their first Valentine’s Day together this year?

I think Ryder would come up with something magical for a very romantic night. Pretty sure it would start off with a dream/fantasy and wind up reality. Maybe at Kara’s family cabin up at Tyrrhenian Sea. 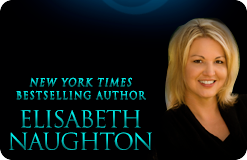