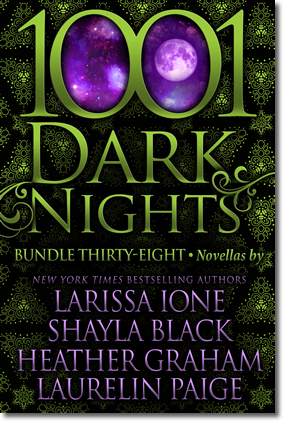 Bond of Destiny by Larissa Ione
Sold into slavery mere hours after his birth to werewolf parents, Tracker spent decades in service to cruel underworlders. Then the fallen angel Harvester transferred his ownership to a human woman who gave him as much freedom as the unbreakable bond would allow. Still, thanks to his traumatic past, he’s afraid to trust, let alone feel love. But when Stacey Markham shows up at his door, injured and in need of help, he finds himself longing for a connection. For someone to touch. For someone to care.

More Than Possess You by Shayla Black
I’m Hayes Elliott. Since second grade, I’ve had one best friend, Echo Hope. When she graduates from college, of course I have to give her something amazing. Since I’ll be on a business trip to Maui, I’m bringing her along for a week of fun and sun. But once she sheds her long skirts, serious buns, and combat boots for bikinis, I can’t deny how stunning she is…and I can’t stop wanting her.

Haunted House by Heather Graham
Krewe member Jon Dickson’s fiancée Kylie Connelly is contacted by an old friend who has just moved to Salem, Massachusetts, when the unimaginable happens as Halloween approaches. Jenny Auger has just managed to buy the historic home of her dreams. But it comes with far more history than she ever imagined—the skeletal remains of seven victims interred in the old walls of the house years and years before—along with a threatening curse.

Man for Me by Laurelin Paige
Brett Sebastian is the very best kind of friend. Who else would get me a job at one of the biggest corporations in America? And hook me up with his uber-rich cousin to boot? And let me cry on his shoulder every time said cousin blows me off?
Okay, it’s pretty obvious that Brett cares about me in a different way than I do for him, but he seems fine with how things are, and our friendship works. Until one fateful night when Brett utters four words that should make me happy for him. “I met a girl.”
And I’m forced to ask myself—am I only interested in Brett now that he’s taken? Or have I been looking at the wrong man all along?